Strengthening its ties with Kabul, New Delhi meanwhile dispatched a consignment of 10,000 tonnes of wheat on Thursday to Afghanistan 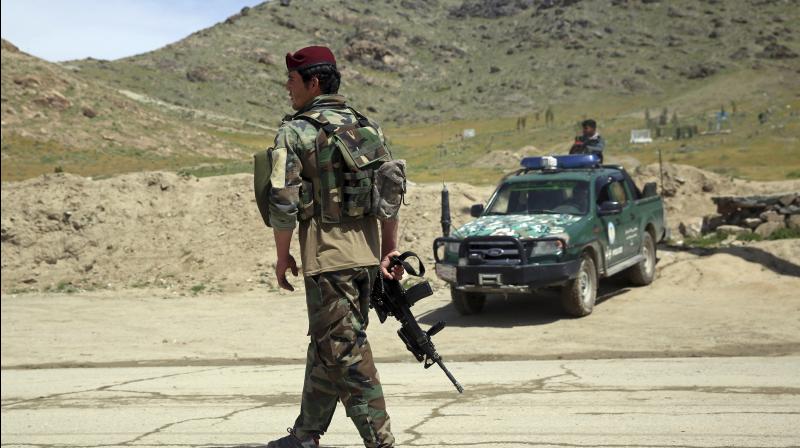 Afghan security personnel stand guard at the site of a suicide bomber attack on the southern outskirts of Kabul. (AP)

New Delhi: The United States is understood to have reiterated its desire for India to play a key role in the Afghan peace process, given New Delhi’s strong relationship with the Afghan Government.

Strengthening its ties with Kabul amid the Coronavirus pandemic, New Delhi meanwhile has dispatched a consignment of 10,000 tonnes of wheat on Thursday to Afghanistan through the Iranian port of Chabahar and this brings the total to a whopping 75,000 tonnes of wheat sent to that country, sources said on Friday.

The Iranian port of Chabahar is crucial for India as it provides sea-land connectivity to Afghanistan thereby bypassing the land route through Pakistan.

Just on Thursday, External Affairs Minister S Jaishankar and National Security Advisor (NSA) Ajit Doval had conveyed India’s “continued support for strengthening ... the democratic and inclusive polity and protection of rights of all sections of the Afghan society, including Afghan Hindus and Sikhs” to visiting United States’ Special Representative for Afghanistan Reconciliation Zalmay Khalilzad who had landed in New Delhi for a few hours.

New Delhi had also conveyed that it is “deeply concerned at the upsurge in violence and supports call for immediate ceasefire” in Afghanistan and that “putting an end to terrorist safe havens and sanctuaries is necessary for enduring and sustainable peace and stability in Afghanistan”. This was seen as a veiled reference to Pakistan which backs the Taliban.

But the US is apparently looking to India to play a greater role in the Afghan peace process.

Khalilzad is also travelling to Qatar to meet Taliban representatives to “press for full implementation of the US-Taliban Agreement”.

Indian Government sources on Friday also said there had been a comprehensive exchange of views with the US official on Thursday and that the impact of the US-Taliban Agreement, the issue of terrorism and attacks by the Taliban in Afghanistan had been discussed with him.

It may be recalled that India had last month “welcomed the announcement” by the Afghan Government on formation of a team for intra-Afghan negotiations with the Taliban.

It may be recalled that prime minister Narendra Modi has been in constant touch with Afghan, with India currently having extremely close ties with Afghanistan under president Ghani.

New Delhi has also successfully undertaken vast development projects in Afghanistan in the past few years, earning much goodwill from the Afghan people. India has also been supplying essential life-saving drugs and medicines to help Afghanistan battle the Coronavirus pandemic.