Control of Congress was still hanging in the balance on Wednesday morning, but returns pointed to surprising Democratic strength 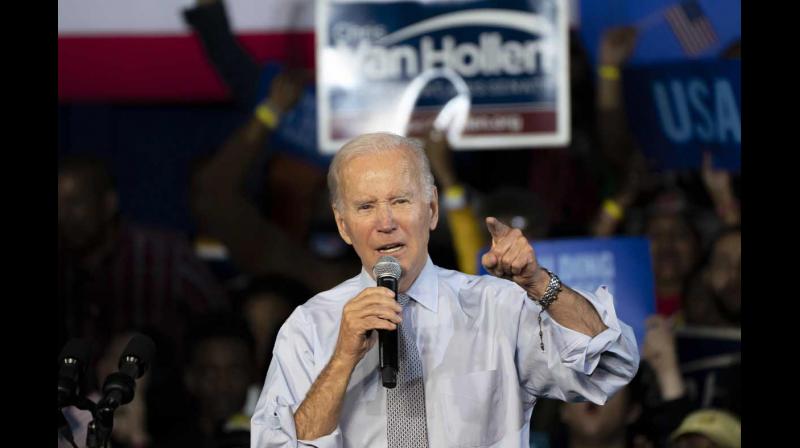 WASHINGTON: Joe Biden's record was on the ballot even if his name wasn't. And no matter the final bottom line of Tuesday's midterm elections, his presidency is set for profound changes.

Biden watched from the White House into the early morning hours Wednesday, making congratulatory calls to more than 30 Democratic candidates and huddling with advisers to watch the incoming returns. In public, the president professed optimism to the end, telling Democratic state party officials on election eve that we're going to surprise the living devil out of people."

In private, though, White House aides have been drawing up contingencies should Republicans take control of one, or both, chambers of Congress a scenario Biden acknowledged would make his life more difficult.

Control of Congress was still hanging in the balance on Wednesday morning, but returns pointed to surprising Democratic strength as the party notched victories in key races, including Pennsylvania's Senate race where John Fetterman flipped a Republican-controlled seat that is key to the party's hopes of maintaining control of the chamber.

Regardless of the outcome, the votes will help reshape the remainder of Biden's term after an ambitious first two years and will reorder his White House priorities.

White House press secretary Karine Jean-Pierre said Biden would address the nation on Wednesday about the results, which may take days to be finalised.

The president last week appealed for Americans to be patient as votes are counted and to avoid engaging in conspiracy theories, a message he was likely to repeat Wednesday about pending returns.

Biden, in his first two years, pushed through sweeping bills to address the coronavirus pandemic, rebuild the nation's infrastructure, address climate change and boost US competitiveness with China  all with the slimmest of congressional majorities. Now, aides and allies say, his focus will turn to preserving those gains, implementing the massive pieces of legislation  perhaps while under intense GOP oversight  sustaining effective governance in an even more charged environment and shoring up his party's standing ahead of the next presidential election.

Should Republicans win control of Congress, Biden allies are gearing up for fights on keeping the government funded and its financial obligations met, sustaining support for Ukraine and protecting his signature legislative achievements from repeal efforts.

Republican wins could also usher in a host of GOP candidates whom Biden has branded as threats to democracy for refusing to acknowledge the results of the 2020 presidential race, limiting potential avenues of cooperation and exposing new challenges ahead of 2024.

The Biden administration has been preparing for months for an expected flood of GOP investigations should Republicans take over one or both chambers, devising legal and media strategies to address probes into everything from the chaotic US military pullout from Afghanistan to presidential son Hunter Biden's business dealings.

If the Republicans take power, Princeton University historian Julian Zelizer said, history shows it would be very effective for Biden to focus on their extremism, and to turn their new power against them.

White House aides and allies have been closely monitoring the clamouring on the right to investigate or even impeach Biden. While they have pledged to cooperate on what they see as legitimate oversight, they are eager to exact a political toll on Republicans should they overreach, casting the GOP as focused on investigations instead of the issues most important to Americans' lives.

The potential shift comes as Biden, at 79, has repeated his intention to run for reelection. He will need to make a final decision soon, perhaps teeing up a rematch against former President Donald Trump, who has teased his own expected announcement for November 15.

In a potential warning sign for 2024, around two-thirds in the AP VoteCast survey said they think Biden is not a strong leader. More than half say the president isn't honest or trustworthy and that he doesn't have the mental capability to serve effectively as president.

A bad midterm outcome doesn't preclude a president's reelection  historically incumbents are strongly favoured to win another term. But Princeton University historian Julian Zelizer said that even presidents who manage to defy history and avoid major losses or hold their majorities are forced to change course for the balance of their terms.

What effective presidents do, is they make defending what they've already done a priority, he said. And then come election time, your record, even if it hasn't grown since the midterms, it looks good. What you don't want is it to be dismantled, not to be able to implement it, and then your opponent in 2024 is going to say, 'Look, what he did was just terribly ineffective and didn't work.'"

In a tacit admission of his narrowed ambitions, Biden's midterm message to voters has largely focused on promoting his accomplishments and warning of the consequences of a GOP takeover.

The larger elements of his 2020 agenda that fell to the cutting room floor during his two years of legislating  such as expanding free early childcare and two years of community college  have hardly factored into his speeches.

What hints he has given about what he hopes to pass in the coming two years have been conditioned on the slim chance that Democrats expand their thin majorities in Congress: passing an assault weapons ban, voting reform and a law codifying a right to abortion nationwide.

Pressed Monday on why Biden hadn't done more to outline what he hopes to accomplish in his next two years, Jean-Pierre said: Why not just tell the country what we have done? Why not just lay that out? Which we have.

The president's advisers have stressed the headwinds facing Democrats this year, as inflation combines with historical trends that are unfavourable to the party in control of the White House. They maintain that Biden's agenda remains popular with voters and has been embraced, not shunned, by his party's candidates  unlike 2010, when Democrats fled from the unpopularity of the Affordable Care Act, the Obama-era health law, and went on to lose 63 House seats and six Senate seats.

Biden allies have begun considering areas of potential bipartisan cooperation that could also pay 2024 dividends should Republicans block them, such as veterans' care and lowering insulin costs for all Americans. The Democrats' August health care and climate bill capped the drug's cost at USD 35 a month for seniors.

Cedric Richmond, the former Louisiana congressman and ex-Biden aide who is now a top adviser to the Democratic National Committee, said Biden would focus on areas of bipartisan cooperation in the second half of his first term.

Regardless of who's in, he's going to work to try to accomplish his goals, Richmond said. He pointed to Biden's ability to push through the infrastructure bill and a law to improve veterans' health care as areas "where he brought Republicans along, so he's going to continue doing what he's doing, which is busting his tail to get accomplishments."