The survey found that 77 percent voters characterized prejudice against minority groups in America as ‘very serious’ or ‘somewhat serious’. 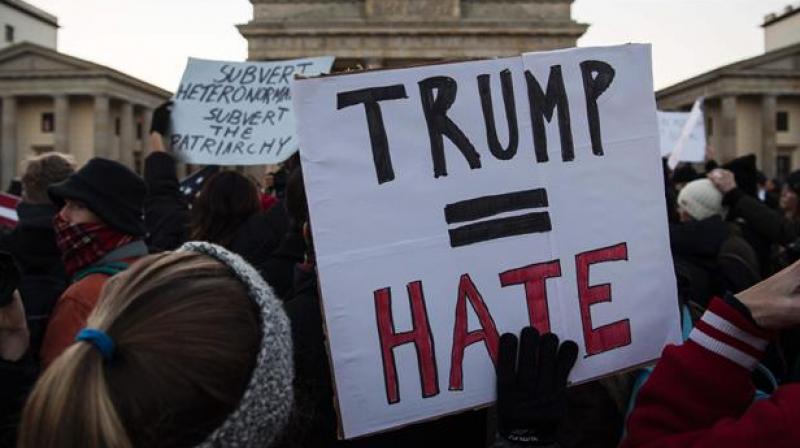 Washington: Nearly two-thirds of US voters say hatred and prejudice in the United States have risen since Donald Trump was elected president, an opinion poll revealed Thursday.

Sixty-three percent of subjects polled by Quinnipiac University said hatred and prejudice have increased since Trump's November 2016 election, while 32 percent said the levels have not changed. Just two percent said they have decreased.

The survey found that 77 percent of voters characterized prejudice against minority groups in America as a "very serious" or "somewhat serious" problem.

Seventy percent of voters said anti-Semitism was a "very serious" or "somewhat serious" problem, up from 49 percent in February, the poll found.

The Quinnipiac poll said US voters were split over Trump's response to threats and acts of vandalism at Jewish cemeteries, with 37 percent who approve and 38 percent who disapprove.

Trump remained silent for several days on an attack damaging more than 100 headstones at a Jewish cemetery in Missouri, before decrying anti-Semitic threats as "horrible" and "painful."

The Anti-Defamation League, a national civil rights group dedicated to the fight against anti-Semitism, has recorded 140 bomb threats against Jewish institutions across the country since January 1.

To date, one man has been arrested in connection with eight of those threats, the organization said earlier this week.

Critics voiced concern about Trump's embrace by white supremacist groups and an "alt-right" movement given a platform on Breitbart, the online news outlet once headed by his chief White House strategist Steve Bannon.

"Americans are concerned that the dark forces of prejudice and anti-Semitism are rearing their ugly heads," said Tim Malloy, assistant director of the Quinnipiac University Poll.

The survey polled 1,323 voters nationwide from March 2-6 and carried a margin of error of 2.7 percent.