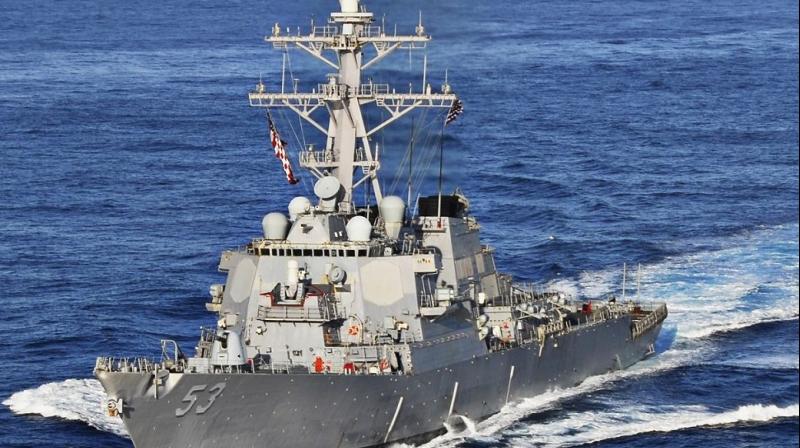 New Delhi/Washington: The US Navy carried out a “freedom of navigation” operation in India’s exclusive economic zone (EEZ) near Lakshadweep Islands earlier this week, without New Delhi’s prior consent, to challenge what the US said were India’s “excessive” maritime claims, a official US statement said.

The operation was conducted by guided missile destroyer USS John Paul Jones on Wednesday, April 7, a statement by the commander of the US Seventh Fleet said.

The US Navy said it had “asserted navigational rights and freedoms approximately 130 nautical miles west of Lakshadweep Islands, inside India’s exclusive economic zone without requesting India’s prior consent”, saying further it had “challenged India’s excessive maritime claims”. The US Seventh Fleet claimed this operation was “consistent with international law”.

Reacting to this on Friday evening, India said it had raised its concerns with the US through diplomatic channels, adding that the US warship’s movements had been continuously monitored. New Delhi made it clear that international law did not permit a nation to carry out military manoeuvres, especially involving weapons, in the EEZ and continental shelf without the consent of the concerned coastal state.

The US announcement is being seen by observers as nothing short of a mystifying attempt to humiliate India, which is a strategic partner of the US in the four-nation “Quad” that supports freedom of navigation in international waters. There is also speculation that it may be part of an American attempt to placate China at India’s expense. The Americans have been operating their warships in the South China Sea as well, which has angered Beijing in the recent past.

In a statement, the MEA said: “The Government of India’s stated position on the United Nations Convention on the Law of the Sea is that the convention does not authorise other states to carry out in the exclusive economic zone and on the continental shelf, military exercises or manoeuvres, in particular those involving the use of weapons or explosives, without the consent of the coastal state.”

The MEA added: “The USS John Paul Jones was continuously monitored transiting from the Persian Gulf towards the Malacca Straits. We have conveyed our concerns regarding this passage through our EEZ to the Government of the United States through diplomatic channels.”

In its statement, meanwhile, the US Seventh Fleet said: “USS John Paul Jones (DDG 53) asserted navigational rights and freedoms approximately 130 nautical miles west of the Lakshadweep Islands, inside India’s exclusive economic zone, without requesting India’s prior consent, consistent with international law. India requires prior consent for military exercises or manoeuvres in its exclusive economic zone or continental shelf, a claim inconsistent with international law. This freedom of navigation operation (“FONOP”) upheld the rights, freedoms, and lawful uses of the sea recognised in international law by challenging India’s excessive maritime claims.”

It added: “US forces operate in the Indo-Pacific region on a daily basis. All operations are designed in accordance with international law and demonstrate that the United States will fly, sail and operate wherever international law allows. We conduct routine and regular Freedom of Navigation Operations (FONOPs), as we have done in the past and will continue to in the future. FONOPs are not about one country, nor are they about making political statements.”

It is not the first time that the US Navy has conducted such an operation in India’s EEZ. The US defence department publishes an annual Freedom of Navigation Report “identifying the excessive maritime claims that US forces operationally challenged”. The last time the US Navy conducted such an operation was 2019. In an unclassified report to the US Congress in July 2020, the US Navy said it conducted an operation in the Indian Ocean region during the period from October 1, 2018, through September 30, 2019, to preserve the rights, freedoms, and uses of the sea and airspace guaranteed to all nations by international law.