North Korea's main economic partner China has signed up to the measures, as has Russia. 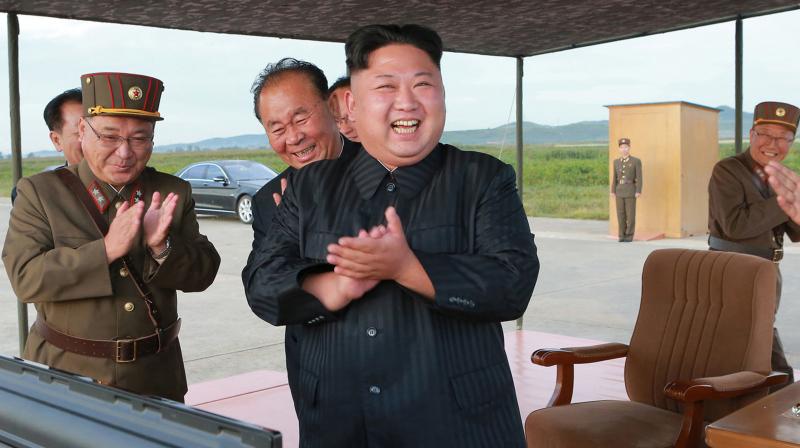 North Korean leader Kim Jong Un, center, celebrates what was said to be the test launch of an intermediate range Hwasong-12 missile at an undisclosed location in North Korea. (Photo: AP)

United Nations: The UN has slapped a global port ban on four vessels found violating sanctions against North Korea, the head of an expert panel said Monday in what he described as an unprecedented move.

The United States led a drive at the Security Council to impose two recent sets of sanctions to punish Pyongyang over its nuclear and missile tests.

"There are four vessels that have been designated by the committee. The designation doesn't mean an assets freeze or travel ban. But it's a port ban," said Hugh Griffiths, coordinator of a UN Security Council panel on North Korea sanctions, adding the ships were found "transporting prohibited goods."

"It's a pretty swift and decisive action by the committee," he said, adding that the ban went into effect on October 5.

Griffiths was speaking at the conclusion of the second UN meeting on enforcing North Korea sanctions.

A source close to the matter said the four ships were found carrying coal, seafood and iron ore, exports banned by a UN resolution imposed in August.

The ban was expanded last month to include textiles and North Korean guest workers and also capped oil exports.

North Korean diplomats were present at the meeting but did not speak, according to diplomats.

According to a source, the listed ships were the Petrel 8, Hao Fan 6, Tong San 2 and Jie Shun. According to the MarineTraffic website, the first three fly the flags of Comoros, Saint Kitts and Nevis, and North Korea. The Jie Shun is not listed on the site.

"It is crucial that resolutions are fully enforced," Inigo Lambertini, Italy's deputy representative to the UN said.

"Sanctions are not the final objective. Just a means. But of course, to be effective, sanctions must be applied by everybody," he added.

North Korea's UN envoy last week accused the US of working to block economic development and denounced sanctions imposed on poor countries as a bid to "destroy modern civilization."

Ambassador Ja Song Nam said North Korea will withstand the blow of sanctions and continue "along the road of building the socialist power by dint of the spirit of self-reliance and self-development."

The latest set of sanctions were in response to Pyongyang's sixth nuclear test -- the largest yet -- and the firing of two missiles over Japan.

North Korea's main economic partner China has signed up to the measures, as has Russia.

But the US has not ruled out the use of force to compel Pyongyang to halt its missile and nuclear tests, and President Donald Trump has threatened to destroy the country.

On Saturday, he said that diplomatic efforts have consistently failed and "only one thing will work," in what appeared to be a repetition of previous threats of force.