The event is being organised by the Indian Embassy here along with 'Friends of Yoga'. 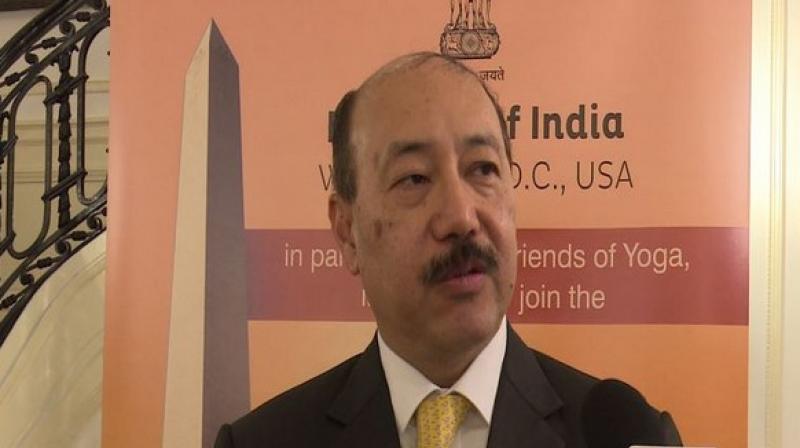 Indian Ambassador to the US, Harsh Vardhan Shringla. (Photo: ANI)

Washington DC: More than 3000 yoga enthusiasts are expected to observe the International Day of Yoga, for the fifth consecutive year, at the Washington Monument here on Sunday.

"People are getting to know about the benefits of yoga. Yoga is already popular in the United States. It is considered to be a very trendy thing. In other words, it is something that people see as a holistic way of life. They associate with all the positives in terms of meditation, Ayurveda and all the natural ways of living," the Indian Ambassador to the US, Harsh Vardhan Shringla, told ANI.

"Prime Minister Narendra Modi says Yoga is India's gift to humanity. We have received more than 3000 registrations this year. So, I believe the monument will be covered up with a lot of yoga enthusiasts," the ambassador noted.

On December 11, 2014, 193 members of the United Nations General Assembly approved the proposal by consensus, with a record of 177 countries, thereby marking June 21, the day of the summer solstice, as International Day of Yoga. Since then, Yoga Day has been commemorated annually by the member countries of the UN with great enthusiasm.

The event is being organised by the Indian Embassy here along with 'Friends of Yoga'. A 35 minutes guided yoga session based on 'Common Yoga Protocol' created by the Government of India will be conducted with the help of yoga demonstrators.

But what makes the 2019 celebrations different is the Indian Vegetarian Food Festival, hosted in association with Freer Sackler gallery, adjacent to the Washington Memorial, which will be rolled out post the yoga event.

"The food programme is related to yoga. Vegetarian cuisine in India is a very refined cuisine and not enough is known about it. Therefore, we have arranged for five different stalls representing cuisines from five different parts of India – North, South, East, West and a specialised one," Shringala said.

"We want to introduce a finer vegetarian cuisine for the people here. This food festival will also commemorate the 150th birth anniversary celebrations of Mahatma Gandhi," he added.

Representatives from various wings of the Trump administration are invited but official confirmations are yet to be received by the embassy.

For over a month, as a run-up to the Yoga Day event, the Indian Embassy has been organising curtain raiser events, in collaboration with yoga clubs and yoga studios across the country.

The mission in Washington has further launched an active promotion campaign through its social media platform that has been successful in getting a record-breaking registration number for the yoga day celebrations.