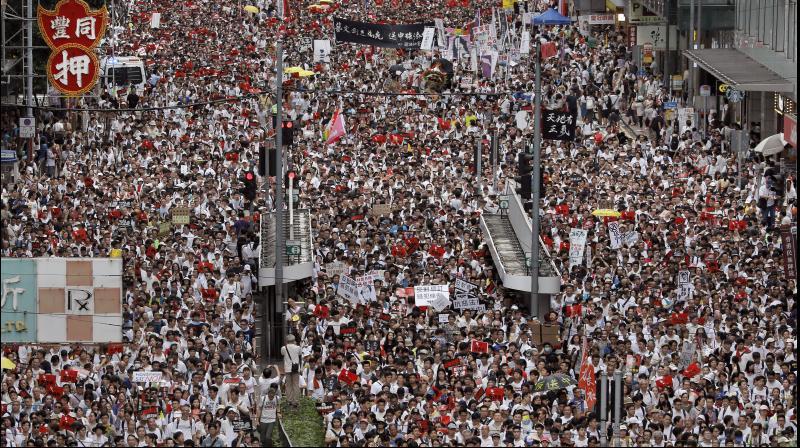 Supporters say the amendments are key to ensuring the city does not become a criminal refuge, but critics worry Beijing will use the law to extradite political opponents and others to China where their legal protections cannot be guaranteed. (Photo: AP)

Washington: The US has expressed grave concern over proposed amendments to Hong Kong laws that would allow suspects to be extradited to mainland China, warning that such a move could undermine the territory's autonomy and negatively impact its longstanding protection of human rights.

Under the amended law, those accused of offences punishable by seven years or more in prison could be extradited. The new legislation would give Hong Kong's leader, known as the chief executive, authority to approve extradition requests, after review by the courts.

Supporters say the amendments are key to ensuring the city does not become a criminal refuge, but critics worry Beijing will use the law to extradite political opponents and others to China where their legal protections cannot be guaranteed. "The United States expresses its grave concern about the Hong Kong government's proposed amendments to its fugitive offenders ordinance, which, if passed, would permit Chinese authorities to request the extradition of individuals to mainland China," State Department spokesperson Morgan Ortagus told reporters.

The peaceful demonstration by hundreds of thousands of citizens a day earlier clearly shows the public's opposition to the proposed amendments, she said. The United States shares the concern of many in Hong Kong that the lack of procedural protections in the proposed amendments could undermine Hong Kong's autonomy and negatively impact the territory's longstanding protections of human rights, fundamental freedoms, and democratic values, as enshrined in the Basic Law and the Sino-British Joint Declaration, she said.

The Sino-British Joint Declaration, signed in 1984 by then British Prime Minister Margaret Thatcher and Chinese Premier Zhao Ziyang, laid out how Britain would end its century-and-a-half long rule over Hong Kong. It also guarantees the city's rights and freedoms under the "two systems" formula.

Under Hong Kong's mini-constitution, the Basic Law, Hong Kong was guaranteed its freedoms for “at least 50 years” after 1997. "We are also concerned that the amendments could damage Hong Kong's business environment and subject our citizens residing in or visiting Hong Kong to China's capricious judicial system," Ortagus said.

Last month, US Secretary of State Mike Pompeo met with a delegation of pro-democracy leaders from Hong Kong to discuss their broad reservations about the extradition proposal. “We believe that any amendments to the fugitive offenders ordinance should be pursued with great care and in full consultation with a broad range of local and international stakeholders who may be affected by the amendments,” she said.