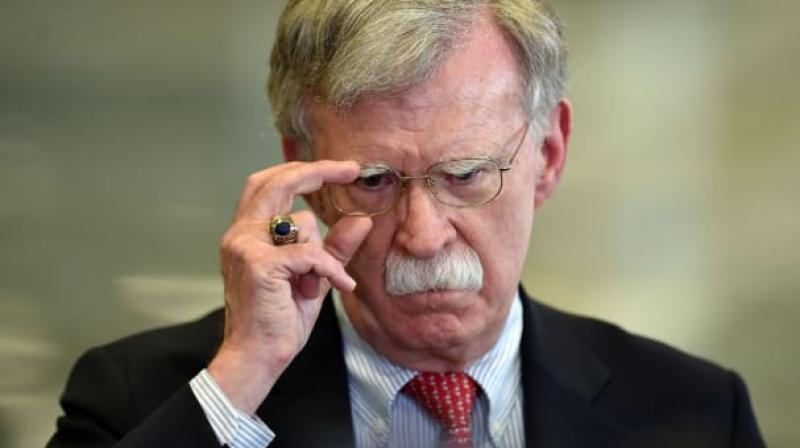 New Delhi: Former US national security advisor John Bolton feels China has been behaving in a belligerent fashion, all around its periphery, in an effort to assert itself through not just political and military means but also through the belt and road initiative and others to gain increased sway over countries that become economically dependent on it.

Bolton also believed that US President Donald Trump's "gut instinct" for the next four months is to take anything off the table that complicates what is already a difficult election campaign for him.

The former NSA said he does not think Trump knows anything about the history of border clashes over the decades between India and China.

"Trump may have been briefed on it, but history doesn't really stick with him," said Bolton, who was the US NSA from April 2018 to September 2019 under the Trump administration.

"I think his (Trump) gut instinct for the next four months is to take anything off the table that complicates what is already a difficult election campaign for him."

"So what he (Trump) would want is quiet along the border whether it benefits China or India. From his point of view -- No news is good news," he told WION TV in an interview.

Replying to a question, Bolton said the fact is China has been behaving in a belligerent fashion, all around its periphery, certainly in the East and South China sea.

"Its relations with Japan has declined, with India, you are well aware of the facts there. I think this is China's effort to assert itself through not just political and military means but also through the Belt and Road initiative and others to gain increased sway over countries that have become economically dependent on it. Sri Lanka has been subject to this death diplomacy and Pakistan and many countries in Central Asia. I think China has a grand strategy and it's pursuing it, the United States has been asleep at the switch and so have many other countries," he said.

Bolton said it is time to wake up and talk more among ourselves.

For example, PM Modi has been a big advocate of greater trilateral cooperation between India, Japan and the United States and I think that makes a lot of sense.

On how far Trump was prepared to back India against China, he said, "I don't know which way he would go and I don't think he knows either. I think he sees the geostrategic relationship with China, for example, exclusively through the prism of trade."

"I don't know what Trump will do after the November elections once the guard rail is removed... He'll be back to the big China trade deal. If things were to develop between India and China in a more critical fashion, I'm not sure where he would come down," the former US envoy to the UN said.

Asked if he believes that if things were to escalate between India and China, there is no guarantee that Trump will back India against China, Bolton said, "That is correct".

The Indian and Chinese armies are locked in a bitter standoff in multiple locations in eastern Ladakh for the last eight weeks. The tension escalated manifold after the Galwan Valley clashes on June 15 in which 20 Indian Army personnel were killed.

Both sides have held several rounds of diplomatic and military talks in the last few weeks to ease tension in the region.