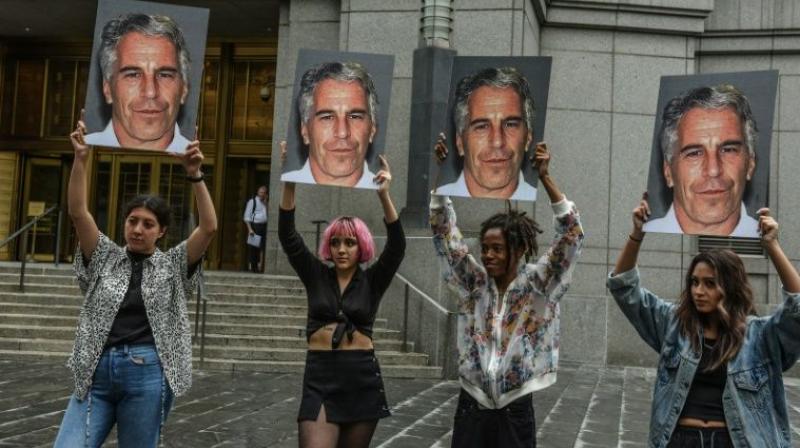 A month before Jeffrey Epstein's death by apparent suicide in a New York prison, a federal indictment cast light on what prosecutors said was a sprawling network of high school and college students lined up by young recruiters and then forced to satisfy the hedge fund billionaire's insatiable sexual appetite. (Photo: File)

New York: A month before Jeffrey Epstein's death by apparent suicide in a New York prison, a federal indictment cast light on what prosecutors said was a sprawling network of high school and college students lined up by young recruiters and then forced to satisfy the hedge fund billionaire's insatiable sexual appetite.

"He likes beautiful women... and many of them are on the younger side," Donald Trump, then a friend of Epstein's, said in 2002.

In reality, the women were not just "younger" -- they were alleged to be underage teen girls.

US Attorney General William Barr said he was "appalled" to learn of Epstein's apparent suicide in federal custody.

At the time, the Brooklyn native was considered beyond reproach: a brilliant hedge fund manager, rich, a friend to celebrities and politicians, including Trump and Bill Clinton.

But his luxurious homes in Palm Beach, Florida, and New York hid dark secrets, according to investigations by American authorities and multiple lawsuits by alleged victims.

Dozens of girls, some only 14 years old, would allegedly pass through Epstein's "massage" parlor, sometimes multiple times a day. The room was decorated with suggestive pictures and sex toys, according to the allegations.

Epstein allegedly relied upon an army of recruiters, often not much older than their targets, whom they would smoothly approach, presenting the former math teacher as a benefactor.

"He's helped me," one such recruiter told Jennifer Araoz, who was 14 at the time, outside her school near Epstein's New York home.

"She was similar to me," Araoz, now 32, told NBC. The recruiter told Araoz that Epstein could help her find work in the entertainment industry.

Epstein's "little black book" eventually included the names of more than 100 recruits from areas where he had residences, including Paris, the Miami Herald reported.

Housekeepers, Epstein's secretary and the recruiters meticulously tracked appointments, modes of transport -- sometimes by private jet -- and payment, usually USD 200-300 per visit, according to multiple accounts.

Multiple women say they attempted in vain to refuse Epstein.

"I was terrified and I was telling him to stop," said Araoz, recounting one visit during which she said Epstein raped her.

"If I left Epstein... he could have had me killed or abducted, and I always knew he was capable of that," another alleged victim, Virginia Roberts, said during a hearing.

"I was very scared."

"Epstein specifically told me... him doing this was so that they would 'owe him,' they would be 'in his pocket," Roberts explained.

Both Trump and Clinton have denied any inappropriate contacts with the girls; Clinton said he knew nothing about the "terrible crimes."

Epstein pleaded guilty in Florida in 2008 to state charges of soliciting prostitution and spent a year in jail.

He was awaiting trial on federal sex-trafficking charges at the time of his death.