'Frankly, I'll tell you, India called us the other day. They said they would like to start doing trade deal, first time,' Trump said. 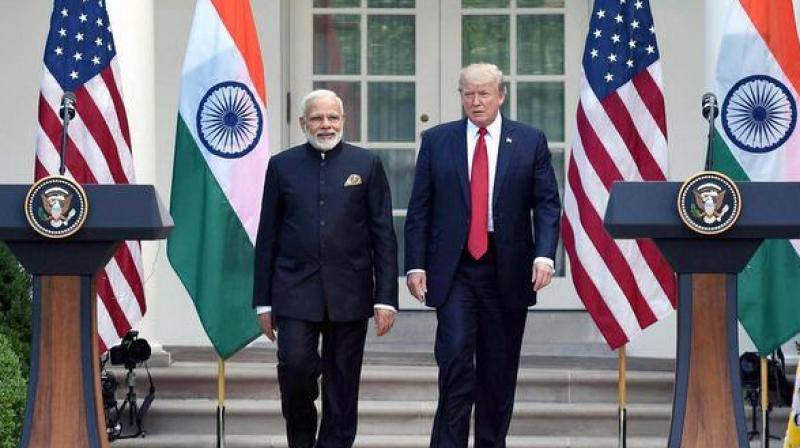 Donald Trump wants to stop the subsidies that growing economies like India and China have been receiving as he wants the US, which he considers as a developing nation, to grow faster than any other nation. (Photo: File)

New Delhi/Washington: US President Donald Trump has said India wants a trade deal with the US despite the tough stance taken by his administration on the issue.

Donald Trump wants to stop the subsidies that growing economies like India and China have been receiving as he wants the US, which he considers as a developing nation, to grow faster than any other nation.

He often accuses India of imposing 100 per cent tariffs on American products.

"Frankly, I'll tell you, India called us the other day. They said they would like to start doing a trade deal, first time," President Trump said without mentioning who called up whom.

"They wouldn't talk about it with previous administrations. They were very happy with the way it was," Donald Trump told his supporters on Friday at a Joint Fundraising Committee Reception, in Sioux Falls in South Dakota.

"We have very talented people. They said, 'Why are you calling?' Because of President Trump. I was going to wait a little while. We're going to -- like they want to do it," the US President said, without giving details.

The United States and Japan have also started discussions over trade, he said.

President Trump said that he has become friends with foreign leaders including Prime Minister Narendra Modi and the Japanese Prime Minister Shinzo Abe.

"Practically, every time a foreign leader comes in to see me, whether it's Abe of Japan, whether it's Modi of India, I've become friends with all of them," he said.

"You know, some of them are tough relationships because they've really been taken advantage of our country for many, many decades. But I'm friendly. They respect me. I respect them. They're respecting our country again," he said.

Referring to the latest GDP numbers, he said, "Think of this. One point in GDP, now when I started, it was down into low ones. President Obama had the lowest recovery since the Great Depression, so lowest. The worst recovery. It was like this. It was just terrible. And I'm not even knocking it. It was terrible."

"We have such incredible growth. What's happened has been very much of a miracle, but they haven't seen the miracle yet. The miracle is going to start because now we're getting things ready," Trump said.

If countries like India and China can grow at a fast pace, why not the US, he asked.

"I've said, 'You fixed a trade deal. When India has six, seven, eight per cent, when China used to have 11, 12 per cent, they're still at six or seven, when they're at seven per cent they're feeling badly. And I'd say, 'How come we have to be at one per cent?" Well, it's the size. I said, 'Really? Well, China is bigger than we are and India has 1.5 billion people. How come they're at 10 per cent and 11 per cent?' Well, they can't answer it," Donald Trump said.

"They can be at 11 per cent and we're at 1 per cent, and they're saying, oh, that's great. No, no, we have more potential than any other country," he said.