It is believed that the hijackers were hoping to use the plane to attack the Capitol, home to the US House of Representatives and Senate. 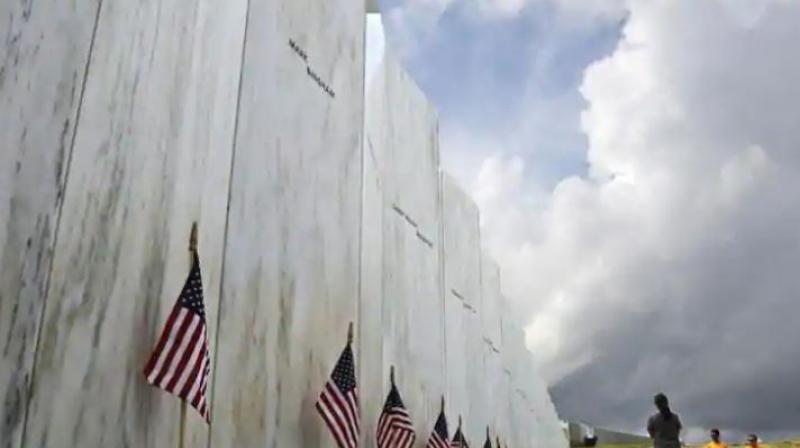 Visitors to the Flight 93 National Memorial pause at the Wall of Names honouring 40 passengers and crew members of United Flight 93 killed when the hijacked jet crashed at the site during the 9/11 terrorist attacks, near Shanksville, Pennsylvania. (Photo: AP)

Washington: Seventeen years after the devastating 9/11 attacks, President Donald Trump heads to Pennsylvania on Tuesday to pay tribute, as his predecessors have done, to the men and women who died aboard hijacked Flight 93.

On September 11, 2001, the plane -- one of four commandeered by Al-Qaeda militants -- crashed into a field in the small town of Shanksville, about 130 miles (200 kilometers) northwest of Washington.

Those aboard United Flight 93, told over the phone by their loved ones that two other passengers jets had smashed into New York's World Trade Centre, tried to regain control of their aircraft. The crash site was far short of the attackers' goal: the US capital. The passengers who died in Shanksville have been hailed as heroes ever since.

White House spokeswoman Sarah Sanders said Trump would put the emphasis on "remembering that horrific day... and certainly honoring the individuals who were not only lost that day, but also put their lives on the line to help in that process."

It is believed that the hijackers were hoping to use the plane to attack the Capitol, home to the US House of Representatives and the Senate. On that day in 2001, Congress was in full session.

Trump will be accompanied by his wife Melania on a day that has come to symbolize national unity -- and which should offer him a welcome respite from the political mayhem swirling around him in Washington. Tuesday's trip comes on the day that investigative reporter Bob Woodward's scathing White House tell-all book "Fear" -- which paints a portrait of a man unable to handle the presidency -- hits stores.

America's First Couple will visit the newly inaugurated Tower of Voices at the Flight 93 National Memorial -- a 93-foot-tall (nearly 30-meter) monument with 40 wind chimes to represent the 40 passengers and crew killed on the flight. The sound the chimes make will change depending on the strength and direction of the wind.

At 10:03 am on September 11, 2001, the moment when the Boeing jetliner crashed in an immense plume of smoke, the names of the victims will be read one by one. The story of the doomed flight -- which was meant to head from Newark, New Jersey to San Francisco -- has been the subject of several films including "United 93" by director Paul Greengrass.

The last moments of the flight and the conversations between passengers, crew members and the hijackers fighting in the cockpit were broadcast in 2006 in a US courtroom during the trial of Frenchman Zacarias Moussaoui.

The cries heard in the cockpit left both jurors and those attending the hearing of the only man thus far convicted over the 9/11 attacks in shock.

The 9/11 plane strikes, which destroyed the Twin Towers and left a gaping hole in the Pentagon, killed nearly 3,000 people, most of them in Manhattan. In a sign of how devastating the attacks were to the Big Apple, the Cortlandt Street subway station -- left for years under mountains of debris -- only reopened on Saturday. "WTC Cortlandt is more than a new subway station... it is symbolic of New Yorkers' resolve," said Joe Lhota, head of the city's Metropolitan Transportation Authority.