Trump has expressed concern that he could be impeached when Democrats take over House; CNN quoted a source close to president as saying. 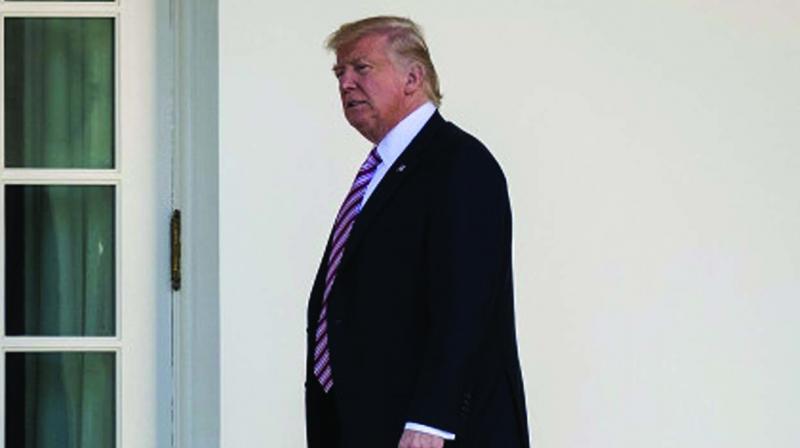 Trump is facing off against a series of accusations put together by a team of investigators. (Photo: File)

Washington: US President Donald Trump sees his impeachment as a "real possibility" over finance violations during the 2016 campaign, according to a media report.

Impeachment talks have ratcheted up in recent days following a blockbuster filing from prosecutors in the Southern District of New York in which they directly alleged for the first time that Trump's former attorney Michael Cohen was being directed by the president when he broke the law during the 2016 presidential campaign, CNN said.

Trump has expressed concern that he could be impeached when Democrats take over the House; CNN quoted a source close to the president as saying.

Trump is facing off against a series of accusations put together by a team of investigators. Special counsel Robert Mueller has launched an 18-month investigation into the legitimacy of Donald Trump's 2016 election win.

A source close to the White House told CNN that aides inside the West Wing believe "the only issue that may stick" in the impeachment process is the campaign finance violations tied to former Cohen's payouts to Trump's alleged mistresses, according to the report.

Prosecutors said Trump's lawyer clearly sought to influence the outcome of the 2016 election from the sidelines through illicit payments. Under US federal law, any payments made for the "purpose of influencing" an election must be reported in campaign finance disclosures.

Prosecutors said Cohen took great steps to hide the payments, creating shell companies, using fake invoices and sending them in small amounts so they wouldn't arouse suspicion. He arranged for a USD 130,000 payment to adult film star Daniels, which prosecutors concluded violated campaign finance law prohibitions against donations of more than USD 2,700 in a general election.

Trump has denied all wrongdoing and compared the investigations to a “witch hunt”. Democrats are suggesting Trump committed an impeachable offence and could be sent to prison when his term in the White House is over.

The incoming chairman of the House Judiciary Committee, Jerry Nadler, said Sunday the allegations, if proven, would constitute "impeachable offences."

Democratic Senator Chris Coons said on Monday Trump could be indicted after he leaves office. Cohen first made the allegation in court in September that he was directed by Trump to make the payments to the two women, Stormy Daniels and Karen McDougal.

Prosecutors endorsed the allegation in a sentencing document for Cohen on Friday, in which they said Cohen should receive a "substantial sentence" for the crimes he committed, which included campaign finance violations for the payments to the two women, tax fraud and lying to Congress.

White House officials, at the moment, still don't believe special counsel Mueller's investigation into possible collusion will result in impeachment. Officials are also comforted by their belief that the campaign finance issue is not seen as enough to galvanize bipartisan support for impeachment, the report said. Another separate source said Trump remains confident at this point that, while he could be impeached in the House, he doesn't believe he would be convicted in the Senate as the Republicans remains in control there.

The campaign finance issue tied to the alleged mistresses is not viewed as having the firepower to trigger a bipartisan vote for conviction and removal in the Senate, the source said.

These beliefs about the politics at play in impeachment proceedings are based on what White House officials believe Mueller has on Trump right now. It's still unclear exactly where else the special counsel's probe could go, the report said.