Trump and Japan’s Abe take a swing at golf diplomacy

Washington and Tokyo have said the weekend trip is a sign of the importance that both leaders place on the US-Japan relationship. 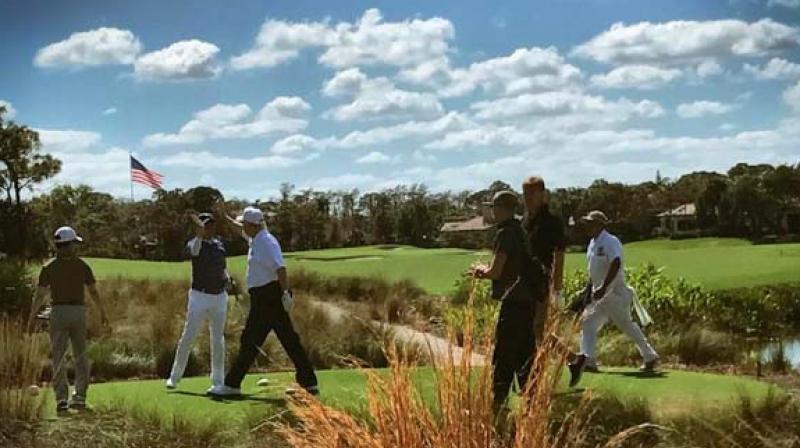 Florida: President Donald Trump and Japanese Prime Minister Shinzo Abe hit the links on Saturday, as the two leaders looked to forge a bond over a round of golf diplomacy.

Trump and Abe played under mostly clear skies at Trump National Golf Club in Jupiter, Florida. The White House did not immediately say whether anyone else joined them and reporters were not allowed on the course to watch the pair.

Abe traveled to Florida on Air Force One with the new U.S. president after a more formal meeting at the White House on Friday. The weekend excursion is Trump’s first use of his Mar-a-Lago resort to entertain an international leader.

Washington and Tokyo have said the weekend trip is a sign of the importance that both leaders place on the U.S.-Japan relationship.

Abe, in particular, sought to ease concerns in Japan about the fate of the decades-long alliance under Trump, who had raised concerns about U.S. military spending in Japan during the 2016 presidential election campaign.

At a press conference on Friday, Trump and Abe focused on areas of common ground, with Trump setting aside campaign pledges to force Tokyo to pay more for U.S. defense aid and Abe promising to help the United States to create jobs.

On Friday night, Trump and Abe ate dinner with their wives on an outdoor patio at Mar-a-Lago. The couples were joined by Robert Kraft, owner of the National Football League’s New England Patriots, which won the Super Bowl last Sunday.

Trump and Abe are set to meet again for dinner Saturday evening, along with some members of the Japanese delegation. The two leaders are set to depart Florida on Sunday.