The Boeing 737 took-off from Bole International Airport and lost contact six minutes later before coming down near Tulu Fara village. 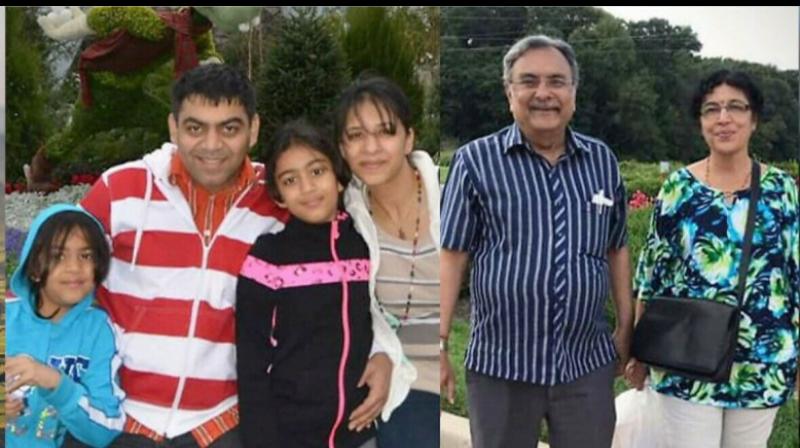 The family who were living in Canada, heading for a safari vacation, were about to experience the trip of a lifetime. (Photo:Facebook)

Ottawa: The "trip of a lifetime" to a safari park in Kenya turned into a nightmare for six members of a family from India in Canada who perished when the Nairobi-bound Ethiopian Airlines plane crashed minutes after take-off from Addis Ababa.

The Boeing 737 took-off from Bole International Airport on Sunday and lost contact six minutes later before coming down near Tulu Fara village outside the Ethiopian town of Bishoftu, killing all 149 passengers and eight crew on board, including tourists and business travellers. The victims included Pannagesh Vaidya, 73; his wife Hansini Vaidya, 67; their daughter Kosha Vaidya, 37; her husband Prerit Dixit, 45; and their two children — Anushka and Ashka — Brampton Mayor Patrick Brown was quoted as saying by the Canadian Broadcasting Corporation.

While the Surat-based Vaidya couple were Indian nationals, their daughter, husband and two children were Canadians of Indian-origin. The family who were living in Canada, heading for a safari vacation, were about to experience "the trip of a lifetime" in Kenya when the tragic loss happened. "This is an unbelievably tragic situation for this family," Brown said in a statement.

"As more details become known, I will provide a further update on how Brampton residents can assist this family. Our thoughts and prayers are with them during this time of sorrow and reflection."

The flags at city hall will remain at half-mast until further notice in honour of the family, Brown said in a message on Twitter.

"It's a huge tragedy," Manant Vaidya, son of Pannagesh, said. "I lost my parents, I lost my sister. I don't have anyone else now."

Manant said his sister, who became a Canadian permanent resident in 2003, wanted to take her children to Kenya to visit her birthplace. "They thought March break was the perfect time for them to go over there, have fun," he said. "It was going to be a really great trip for everybody."

"I asked my dad why he wanted to go and he told me that in his life he wants to go one more time." The Peel District School Board said Monday that two of our students Ashka and Anushka Dixit along with their parents and grandparents were passengers on the Ethiopian Airlines plane that was involved in a fatal crash over the weekend. This tragedy has brought great sadness to the students and staff at Centennial Sr. Public School and Chinguacousy Secondary School, the school board said.

"Tomorrow, the flags at @ChinguacousySS & @CentennialSrPS will be lowered to half-mast to remember and honour Anushka Dixit, Ashka Dixit, their parents and grandparents who lost their lives over the weekend," the school board tweeted.

Manant said he last saw his family Saturday morning when he dropped them off at Toronto Pearson International Airport for their 10 a.m. flight overseas. Manant and his wife said they are currently speaking with consular officials overseas and waiting for more information on their family's remains, the report said.

People from 35 countries were reportedly on board the flight ET 302 when it ploughed into a field, 60-kilometer southeast of Addis Ababa. According to the Indian Embassy in Ethiopia, four Indian nationals were killed and they have been identified as Pannagesh Vaidya, Hansini Vaidya, Nukavarapu Manisha, a doctor based in the US, and Shikha Garg, the United Nations Development Programme (UNDP) consultant attached with the Environment Ministry.

Ethiopian Airlines said Kenya had the largest number of casualties with 32, followed by Canada with 18, Ethiopia nine, then Italy, China, and the US with eight each. Britain and France each had seven people on board, Egypt six, and Germany five. Twelve countries in Africa and 14 in Europe had citizens among the victims