Life turns upside down for Indian Americans in US

Work-from-home has become the norm, and travel plans to India have been cancelled 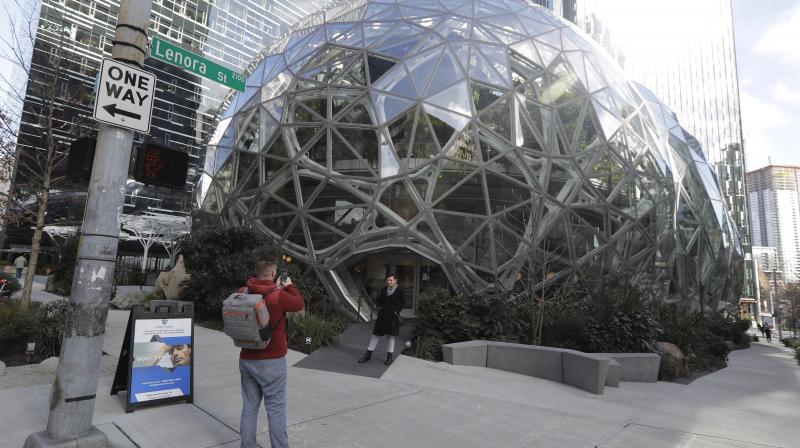 The Amazon headquarters sits virtually empty on March 10, 2020 in downtown Seattle, Washington. In response to the coronavirus outbreak, Amazon recommended all employees in its Seattle office to work from home, leaving much of downtown nearly void of people. The Amazon Spheres conservatory, located on the Amazon campus, serves as an employee lounge and workspace. (AFP)

New York: For the Balakrishnans, an Indian American family living in Camden, New Jersey normal life has turned upside down in the last few days--like it has for thousands of American residents.

The coronavirus (COVID-19) outbreak has drastically changed their daily routine: Doorknobs and kitchen table tops are cleaned several times a day; food is eaten in throwaway plastic plates and cups; kitchen trash is kept out daily; and the family wash their hands with soap more than a dozen times a day.

Even bigger changes have been brought about at the macro level. “My 80-year-old mother was to have gone next week to stay with my brother in the Seattle area of Washington state. But the trip is off now. Our trip to India, booked for May, is unsure too as we don’t know how things will unfold in the coming days and weeks,” S Balakrishnan told this correspondent on the telephone.

Like the Balakrishnan couple, both of whom work, most Indian American couples across the East Coast, Midwest and West Coast are opting to work from home. Indian American families have been visiting supermarkets and Indian stores over the weekend and stocking up on food.

Many Indian Americans are now worried about travel to India in view of the COVID outbreak. Sanjeevini, a software employee who is doing a project at a pharmaceutical company in New Jersey, was apprehensive about her husband Rakesh’s plans to go to India. “He has an H4 visa interview scheduled in Chennai on March 16. We are worried as to how things will unfold in the next few days and whether he would be able to come back to the US,” she said. Finally, Rakesh left for Mumbai en route to Bengaluru on Tuesday night (March 10), and Sanjeevini is still unsure about her husband’s safe passage back to America.

With universities, colleges and schools either already closed or on the verge of closure across the US, other activities are also getting cancelled or curtailed. Hindu temples across the US have shortened timings for darshan as well as cancelled several programmes. “Ugadi, Sri Ramanavami and Tamil New Year cultural programmes stand cancelled,” declared the website of the Venkateshwara Temple at Bridgewater in New Jersey.  The Lakshmi Venkateshwara Temple in Redmond, Washington, which is frequented by Indian and Indian American employees of Amazon, Microsoft and other tech companies in the Seattle area, too has curtailed darshan timings. Some temples, like the Sri Venkateshwara Balaji Temple in Aurora, Illinois, have only issued advisories for infected devotees to stay away but are yet to cancel the scheduled Ugadi and other programmes. A few others, like the Ganesh temple in Flushing, New York, have not taken any contingency measures as yet.

With social distancing poised to set in even more intensely in the coming days, Indian Americans, like most other residents in the US, are looking at testing times ahead, with it not being clear whether the uncertainty will last for a few months are a much longer time.