World   Americas  12 Mar 2021  Biden announces all Americans to be eligible for COVID-19 vaccination by May 1
World, Americas 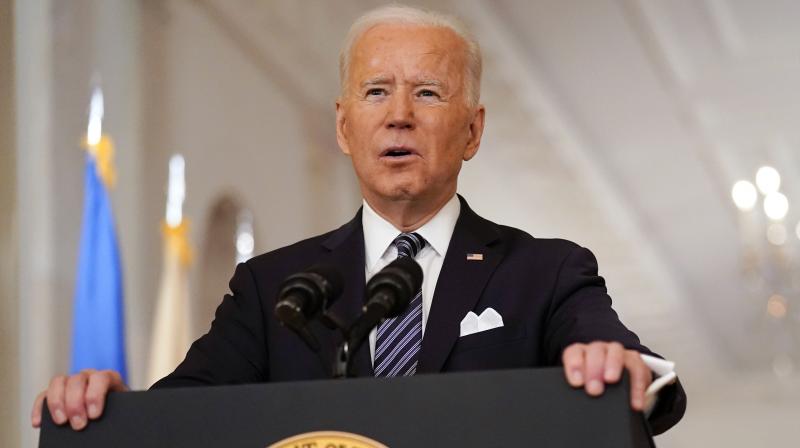 President Joe Biden speaks about the COVID-19 pandemic during a prime-time address from the East Room of the White House, Thursday, March 11, 2021, in Washington. (AP/Andrew Harnik)

Washington: US President Joe Biden has announced that all Americans will be eligible for COVID-19 vaccination by May 1 with an aim to get the country, worst-hit by the pandemic, closer to normal by July 4th, Independence Day.

In his first prime-time address to the nation on Thursday since assuming office in January, Biden also announced the deployment of more than 4,000 active-duty troops to support vaccination efforts, bringing the total to over 6,000.

His speech comes a year to the day the outbreak was classified as a pandemic by the World Health Organisation.

Laying out new steps in the school reopening effort, Biden in his speech that lasted for a little over 20 minutes said his administration will continue to take steps to combat the spread of variants including expanding testing and genomic sequencing.

My fellow Americans, you are owed nothing less than the truth. And for all of you asking when things will get back to normal, here is the truth: the only way to get our lives back, to get our economy back on track is to beat the virus you have been hearing me say that for-- while I was running and the last 50 days I have been President, but this is one of the most complex operations we have ever undertaken as a nation in a long time, Biden said.

The First Lady Dr Jill Biden was present in the East Room of the White House for the prime-time address of her husband wherein Biden said that he is using every power he has as President of the United States to put the US on a war footing to get the job done.

It sounds like hyperbole, but I mean the war footing, and thank God we are making some real progress now. In my first full day in office, I outlined for you a comprehensive strategy to beat this pandemic. We have spent every day since attempting to carry it out, he said.

They were husbands, wives, sons, and daughters, grandparents, friends, neighbours, young and old. They leave behind loved ones unable to truly grief or to heal, even have a funeral..., he said.

The US is the worst-hit country with the world's highest number of cases and deaths at 29,150,068 and 529,102, respectively, according to the Johns Hopkins University.

Biden said at the start of his presidency, his goal was to get 100 million shots in people's arms in my first 100 days in office.

Tonight, I can say we're not only going to meet that goal. We're going to beat that goal because we've actually been on track to reach this goal of 100 million shots in arms on my 60th day in office. No other country in the world has done this. None, he asserted.

Secondly, at the time when every adult is eligible in May, we will launch with our partners, new tools to make it easier for you to find the vaccine and where to get the shot, including a new website that will help you first find the place to get vaccinated and the one nearest you. No more searching day and night for an appointment for you and your loved ones, he said.

Thirdly, with the passage of the American Rescue Plan,... we can accelerate a massive nationwide effort to reopen our schools safely and meet my goal that I stated at the same time about 100 million shots of opening a majority of through 8 schools in my first 100 days in office, he said.

Fourth, in the coming weeks, Biden said his administration will issue further guidance on what Americans can and cannot do once fully vaccinated to lessen the confusion, to keep people safe, and encourage more people to get vaccinated.

And finally, fifth, and maybe most importantly, I promise I will do everything in my power. I will not relent until we beat this virus. But I need you, the American people, I need you. I need every American to do their part. That's not hyperbole, I need you, he said, adding that he needs fellow countrymen to get vaccinated when it's their turn.

If we do all this, if we do our part, we do this together, by July the 4th, there's a good chance you, your families and friends will be able to get together in your backyard or in your neighbourhood and have a cookout and a barbecue and celebrate Independence Day, Biden said.

On July 4th with your loved ones is the goal. But a goal---a lot can happen. Conditions can change. The scientists have made clear that things may get worse again as new variants of the virus spread. We've got work to do to ensure that everyone has confidence and the safety and effectiveness of all three vaccines, he said urging Americans to listen to scientists and doctors.

Tags: joe biden, covid 19 vaccination, us covid 19, johnson & johnson, pfizer, moderna, address to the nation, all americans to be eligible for covid vaccination by may 1