More than 30,000 camp residents are still living in areas considered to be at high risk of deadly flooding and landslides. 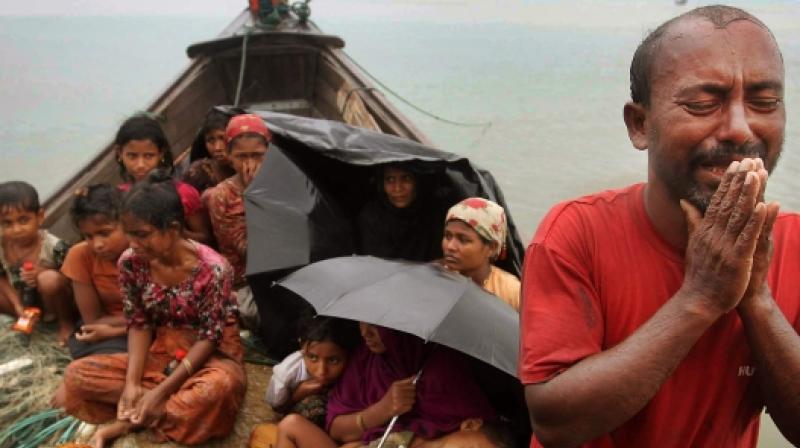 About 150,000-200,000 Rohingya refugees in Bangladesh's Cox's Bazar are at risk from flooding and landslides during the monsoon season. (Photo: AP)

United Nations: Heavy rains have caused severe structural damage to camps in Bangladesh hosting over one million Rohingya refugees from Myanmar, the UN has said.

Some 700,000 Rohingya Muslims have fled Myanmar's Rakhine State to Bangladesh since August last year when the army launched a violent crackdown, resulting in a major crisis in neighbouring Bangladesh.

So far, more than 9,000 have been affected and the number is expected to rise as the monsoon rains, which lashed the camps for the last two days, continue, the UN's International Organization for Migration (IOM) said.

More than 30,000 camp residents are still living in areas considered to be at high risk of deadly flooding and landslides, it said.

"The situation in the camps is growing more desperate with every drop of rain that falls," said Manuel Pereira, the IOM's Emergency Coordinator in Cox's Bazar, the district in south-east Bangladesh where the refugees have settled.

"You have close to one million people living on hilly, muddy terrain with no trees or shrubs left to hold the ground in place. People and their makeshift shelters are being washed away in the rains," Pereira said.

For months now, UN agencies and their partners have been warning of the threat posed by the monsoon season, which runs from June to September.

The rains began on Saturday and within 24 hours incidents including landslides, water logging, extreme wind and lightning strikes were recorded.

The IOM said it is "working against the clock" to secure road access and drainage, and to improve preparations for more heavy rain to come.

The UN agency and its partners are also ensuring that the refugees will continue to receive assistance such as access to water, sanitation and health.

However, it warned that risks remain huge, given the vast size and the nature of the makeshift camps.

The Rohingya are a Muslim minority community in Myanmar, where most citizens are Buddhist.

The majority of those in Bangladesh began arriving in the wake of violence in Myanmar's Rakhine state which began last August.

An agreement signed last week between the Myanmar government and UN agencies is expected to pave the way for scores of Rohingya to return home, once their safety and rights are guaranteed.

It will also allow the UN refugee agency (UNHCR) and the UN Development Programme (UNDP) to access the Rakhine state.

Myanmar and Bangladesh have reached a deal on the return of hundreds of thousands of Rohingyas.

According to the agreement, which was finalised in Myanmar's capital Nay Pyi Daw, a two-year deadline has been set for the repatriation of the Rohingyas.