Trump Jr, released a chain of emails showing sensitive information about WH rival Hillary Clinton in the run-up to the US election 2016. 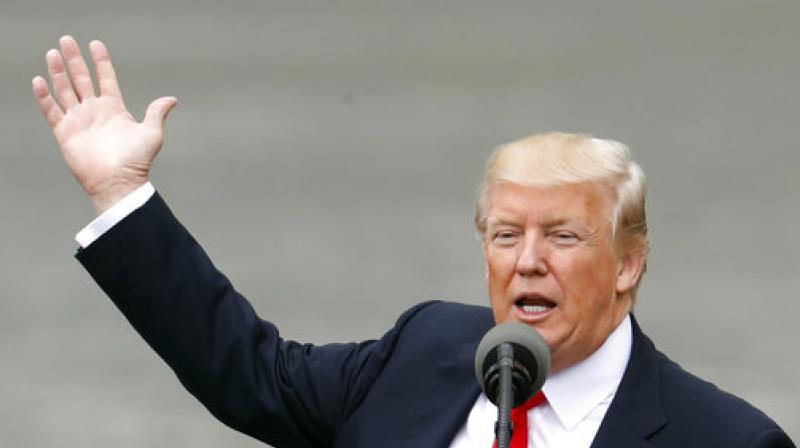 Washington: US President Donald Trump has lauded his son's "transparency" who is in the eye of the storm after releasing emails of his communications with a Russian source who wanted to pass on 'damaging information' about election rival Hillary Clinton.

Donald Trump Jr, the eldest son of US President Donald Trump, had Tuesday released a chain of emails showing a Russian source offering the Trump campaign "sensitive information" about White House rival Hillary Clinton in the run-up to the 2016 presidential election.

"My son is a high-quality person and I applaud his transparency," Trump said in a statement which was read out by the White House Deputy Press Secretary Sarah Huckabee Sanders during her daily news conference.

Sanders refused to respond any further question on the email communication and meeting between Donald J Trump Jr and the Russian contact during the last year's presidential elections.

Trump praised his son for the release of a chain of emails with the Russian source.

While Trump Jr in a statement hoped that by releasing these emails would bring an end to the controversy, the opposition political leaders called for investigation and claimed that this is yet another indication of the connection between the Trump campaign and the Russians.

"Donald Trump Jr has admitted and documented that he, Jared Kushner, and former Trump campaign chairman Paul Manafort met with a Kremlin-connected lawyer with the understanding that she was a Russian government lawyer providing damaging information on Hillary Clinton as part of Moscow's effort to help President Trump's campaign," said Indian American Congressman Raja Krishnamoorthi.

"The attempt by these top Trump advisors to solicit the support of a hostile foreign power to win the American presidency is unprecedented in our history," he said. "The need for Special Counsel Mueller's investigation and our Congressional inquiries to continue has never been more clear.

"I have no doubts as to the Special Counsel and his team's readiness to do its part in fully pursuing all criminal investigations related to these revelations but Congress must fulfil its responsibility.

Pending any investigation, no one who participated in the Trump Tower meeting with Russian lawyer Natalia Veselnitskaya should have access to any classified information, especially material relevant to our national security, Krishnamoorthi said.

Senator Ben Cardin, Ranking Member of the Senate Foreign Relations Committee, said the email shows that Donald Trump Jr clearly understood the intent of the meeting with Natalia Veselnitskaya. "Instead of welcoming information from the Russian government, the Trump team should have immediately notified the Federal Bureau of Investigation.

"I'm not a prosecutor, but I think this is an extremely serious issue and needs to be followed up on by Robert Mueller's investigation and the Congressional Intelligence Committees immediately," Cardin demanded.

"This episode demonstrates why it remains important that an independent commission be established immediately to look into Russia's interference in our election and identify the steps we must take to strengthen our defenses in the future," he said.

"They appear to show direct coordination between the Trump campaign and possibly the Russian government itself," she said. "There are still many questions that must be answered.

That's why I've urged Chairman Grassley to move quickly this issue is squarely within the jurisdiction of the Judiciary Committee and I believe we need to have Donald Trump, Jr, and other individuals come before the committee, in open session, as soon as possible," Feinstein said.

"There's no escaping it: the Trump Campaign's inner circle met with an agent of a hostile foreign power to influence the outcome of an American election. The American people face a White House riddled with shadowy Russian connections and desperate to hide the truth," said Democratic Leader Nancy Pelosi. "One after another, senior Trump officials have been caught hiding secret meetings with Russian agents.

The incendiary news of the meeting arranged by Donald Trump Jr is a grave development in the investigation of Trump officials' possible collusion with  Moscow," she said.

"In addition to Special Counsel Mueller's scrutiny, everyone at the meeting should be immediately summoned to appear under oath before the House and Senate  committees investigating," Pelosi said.