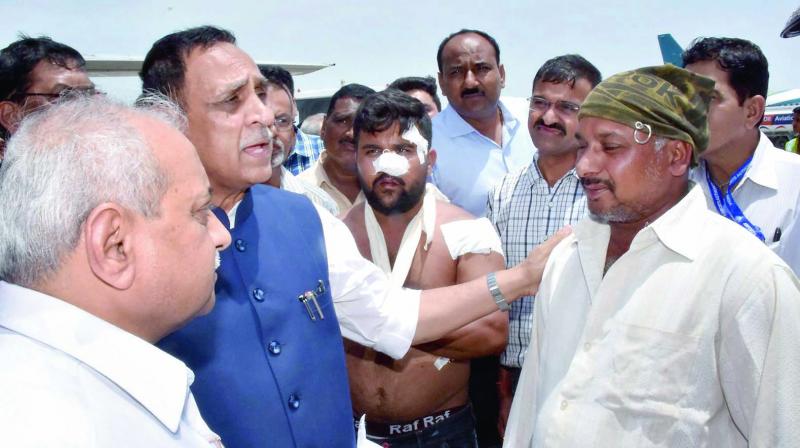 Gujarat chief minister Vijay Rupani and his deputy Nitin Patel interact with Salim Sheikh, driver of the bus, and survivors of the Amarnath attack at the airport in Surat. (Photo: PTI)

Washington: The White House on Wednesday condemned a deadly terrorist attack on Amarnath pilgrims stating it as "cowardly" act.

White House press secretary Sean Spicer said an attack on religious freedom is an attack on the "most fundamental right of liberty."

Spicer is offering condolences to the victims and families of Monday's assault. He said the US and India will fight together against terrorist threats in every part of the world.

During Monday's attack, gunmen sprayed bullets on a passenger bus as it returned Hindu pilgrims from a cave shrine in Indian-controlled Kashmir. Authorities said at least seven people were killed, and more than a dozen others were wounded.

Earlier on Tuesday, the US ambassador to New Delhi deplored the attack on Amarnath pilgrims and said it condemned all acts of terrorism. It also extended its "deepest" condolences to the families and "all those affected".

"We deplore the attack on #Amarnath pilgrims & condemn all acts of terrorism. Deepest condolences to the families & all those affected," the US ambassador to New Delhi's official Twitter post said.

The US has appointed Kenneth I Juster as its ambassador to India but he is yet to take office.

Meanwhile, condemning the terror attack on Amarnath pilgrims in Kashmir, a top Hindu-American body in the US has urged the Trump admin to clampdown on Pakistan for supporting terrorist groups carrying out attacks in India.

"This was an unconscionable attack on innocent pilgrims exercising their most fundamental and basic rights to freedom of religion," said Hindu American Foundation (HAF) board member Rajiv Pandit.