Trump also warned militants of grave consequences if they ever carry attacks on America again. 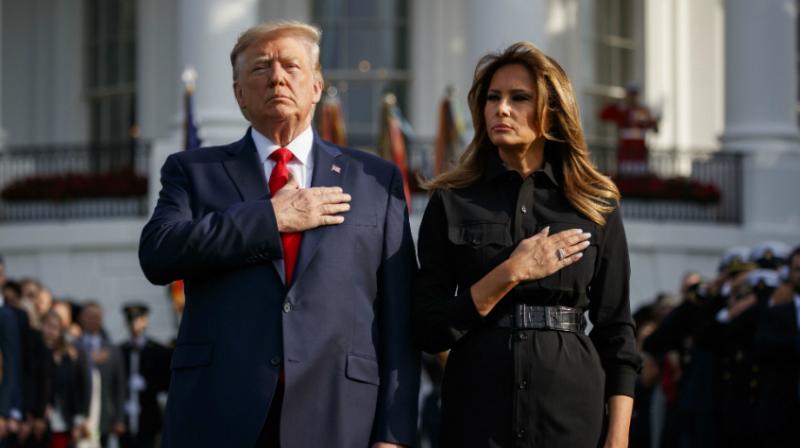 During his speech, he also explained why he cancelled his peace talks with the Taliban. (Photo: PTI)

Washington: Remembering the victims of the 9/11 attack, United States President Donald Trump on Wednesday vowed to hit the Taliban "harder than ever", just days after he cancelled peace talks with the militants in Afghanistan, where the terrorist group al-Qaeda conceived the deadly strike.

Addressing a Pentagon ceremony marking the 18th anniversary of the deadly 2001 terrorist attack that killed nearly 3,000 people, Trump also warned militants of grave consequences if they ever carry attacks on America again.

"They thought they would use this (9/11) attack to show strength, but actually what they showed is unrelenting weakness," he said.

Trump said if terrorists ever attack on the US soil again, the troops will go wherever they are, "and use power, the likes of which the United States has never used before".

"Over the last four days, we (US troops) have hit our enemy harder than they have ever been hit before. And that will continue," Trump said referring to the assault that was ordered after he cancelled the peace talks with the Taliban last week in retaliation for a suicide car bomb attack that killed one American soldier in Kabul.

Leading the nation in honouring and mourning the nearly 3,000 people who lost their lives on September 11, 2001, the president said it was a day filled with shock, horror, sorrow and righteous fury.

Warning terrorist groups of any such misadventure in future, Trump said, "And I'm not even talking about nuclear power. They will never have seen anything like what will happen to them."

During his speech, he also explained why he cancelled his peace talks with the Taliban.

"We had peace talks scheduled. A few days ago. I called them off when I learned that they had killed a great American soldier from Puerto Rico and 11 other innocent people," he said.

Last Saturday, Trump cancelled a "secret" summit with Taliban leaders and his Afghan counterpart after the insurgent group claimed responsibility for a deadly attack in Kabul that killed an American soldier and 11 others, dealing a body blow to protracted negotiations that were nearing a peace deal to end America's longest war.

Trump was to meet Afghan President Ashraf Ghani and senior Taliban leaders on Sunday last week at his Camp David retreat. His move comes after nine rounds of talks between the US and Taliban representatives, held in Doha, the capital of the Gulf state of Qatar.

Trump's US negotiator Zalmay Khalilzad had announced a peace deal "in principle" with the Taliban on Monday last. As part of the proposed deal, the US would withdraw 5,400 troops from Afghanistan within 20 weeks. However, Khalilzad said final approval still rested with Trump. The US currently has about 14,000 troops in the country.

In his address at the Pentagon memorial, Trump said, "18 years ago, the terrorists struck this citadel of power and American strength, but the enemies soon learned that they could not weaken the spirit of our people."

"In times of distress the heart of the American patriot only grows stronger and more determined; even in the midst of the attack the world witnessed the awesome power of American defiance," he said.