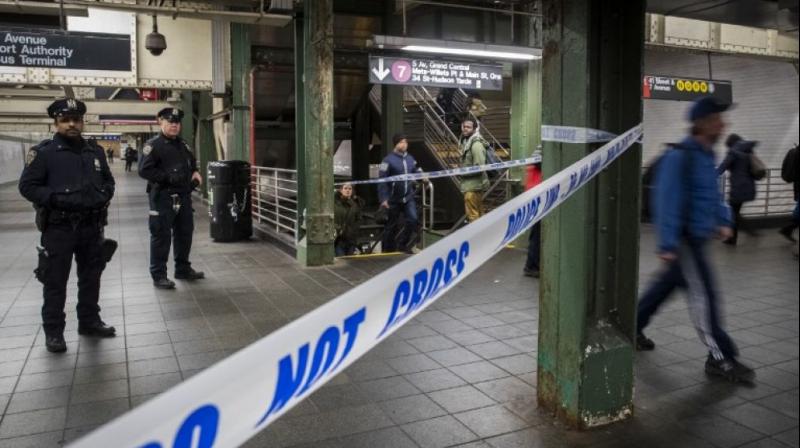 According to officials, the device prematurely exploded between two subway platforms near Port Authority, America's largest bus terminal, injuring four persons and causing chaos in one of the busiest commuter hubs in the metropolis. (Photo: AFP)

New York: The Bangladeshi-origin suspect, who triggered a blast at a metro station in New York City, has pledged allegiance to the Islamic State, officials have said.

Akayed Ullah, the 27-year-old suspected bomber, had wires and a pipe bomb strapped to his body, police said.

The device prematurely exploded between two subway platforms near Port Authority, America's largest bus terminal, injuring four persons and causing chaos in one of the busiest commuter hubs in the metropolis, officials said.

He has pledged allegiance to the ISIS terror group and told investigators that his planed terrorist attack in New York was mainly because of the recent Israeli actions in Gaza, officials said as per multiple media reports.

Ullah, who came to the US some seven years ago from Bangladesh, was apprehended on Monday with wires and a pipe bomb strapped to his body.

He sustained injuries when the explosive devise tied to his body detonated prematurely at a New York metro station during the morning rush hour.

Three others were injured in the "attempted terrorist attack" at about 7.20 AM.

The Homeland Security spokesman Tyler Houlton said Ullah is now a lawful permanent resident. He came to the US in 2011 on an F43 family immigrant visa, which is granted to children of American citizens siblings.

He lives in Brooklyn and is of Bangladeshi descent.

Ullah told investigative officers that he made the explosive device at his work place, which as per some media reports was an electric company.

Even though Ullah pledged allegiance to ISIS, law enforcement officials said as of now there is no known linkage between him and the terrorist outfit.

According to The New York Times, he chose the location of subway because of its Christmas-themed posters, recalling strikes in Europe against Christmas markets, and set off his bomb in retaliation for US air strikes on ISIS targets in Syria and elsewhere, several law enforcement officials said.

Ullah told investigators that he was inspired by propaganda from the Islamic State terror group, according to law enforcement officials, The Washington Post reported.

Attorney General Jeff Sessions said that the attempted terrorist attack by an immigrant is a failure of logic and sound policy not to adopt a merit-based immigration system.

"The President has asked Congress to work with him on ending the diversity lottery and chain migration. He has proposed switching to a merit-based system of immigration similar to the Canadian and Australian systems. That means welcoming the best and the brightest and turning away not only terrorists but gang members, fraudsters, drunk drivers and child abusers. Such a merit-based system would make us safer and welcome individuals who would be best able to assimilate and flourish in our country," he said.

The 20-year-old son of the sister of a US citizen should not get priority to come to this country ahead of someone who is high-skilled, well educated, has learned English and is likely to assimilate and flourish here, Sessions added.