China to directly threaten the US homeland and US forces overseas, including by developing and deploying weapons of mass destruction 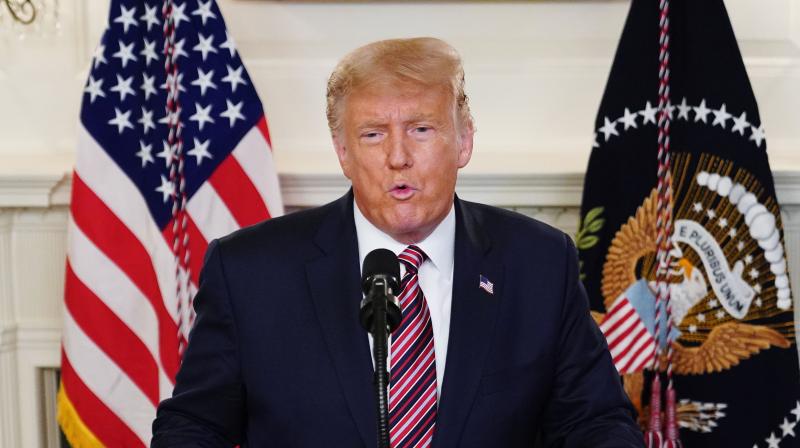 Washington : US President Donald Trump has signed an executive order banning Americans from investing in 31 Chinese firms that the administration says are owned or controlled by the Chinese military.

The Executive Order, which was signed by Trump on Thursday, prohibits certain purchases involving publicly traded securities or any securities that are derivative of or are designed to provide investment exposure to such securities of any Communist Chinese military company.

China is increasingly exploiting US capital to resource and to enable the development and modernisation of its military, intelligence, and other security apparatuses, which continues to allow China to directly threaten the US homeland and US forces overseas, including by developing and deploying weapons of mass destruction, advanced conventional weapons, and malicious cyber-enabled actions against the US and its people, Trump said in his executive order.

The order applies to 31 Chinese companies which it says "enable the development and modernisation" of China's People's Liberation Army (PLA) and "directly threaten" US security.

Smartphone maker Huawei and Hikvision, one of the world's largest manufacturers and suppliers of video surveillance equipment, are among the blacklisted companies, CNN reported.

Some of the other companies listed, including China Telecom and China Mobile, trade on the New York Stock Exchange, it said.

Noting that key to the development of the Chinese military, intelligence, and other security apparatuses is the country's large, ostensibly private economy, Trump said that through the national strategy of military-civil fusion, China increases the size of the country's military-industrial complex by compelling civilian Chinese companies to support its military and intelligence activities.

He said those companies, though remaining ostensibly private and civilian, directly support the Chinese military, intelligence, and security apparatuses and aid in their development and modernisation.

At the same time, those companies raise capital by selling securities to US investors that trade on public exchanges both here and abroad, lobbying US index providers and funds to include these securities in market offerings and engaging in other acts to ensure access to US capital. In that way, China exploits US investors to finance the development and modernisation of its military, Trump said.

US National Security Advisor Robert O'Brien said President Trump has no higher priority than ensuring the security of the Americans.

Many of these companies are publicly traded on stock exchanges around the world, and individual investors in the US can unknowingly provide funds to them through passive institutional investment vehicles such as mutual funds and retirement plans, he said in a statement.

O'brien said Trump's action serves to protect American investors from unintentionally providing capital that goes to enhancing the capabilities of the People's Liberation Army and People's Republic of China intelligence services, which routinely target American citizens and businesses through cyber operations, and directly threaten the critical infrastructure, economy, and military of America and its allies and partners around the world.

Republican Senator Marco Rubio welcomed the executive order, saying China exploiting the US capital market is a clear and ongoing risk to the US economy.

The Chinese Communist Party's exploitation of US capital markets is a clear and ongoing risk to US economic and national security and today's action by the Trump administration is a welcome start to protecting our markets and investors, Rubio said.

"Congress should quickly follow suit by passing my American Financial Markets Integrity and Security Act, which would ban these companies from operating in US capital markets and make clear to the Communist party that they will no longer be able to take advantage of our financial system, he added.

Rubio said importantly, Trump's order also lays down a clear marker for US policy going forward  we can never put the interests of the Chinese Communist Party and Wall Street above American workers and mom and pop investors.

Currently, there are a number of Chinese companies, including over thirty that were identified on lists released in June and August 2020 by the Pentagon, as well as networks of affiliated and subsidiary companies.