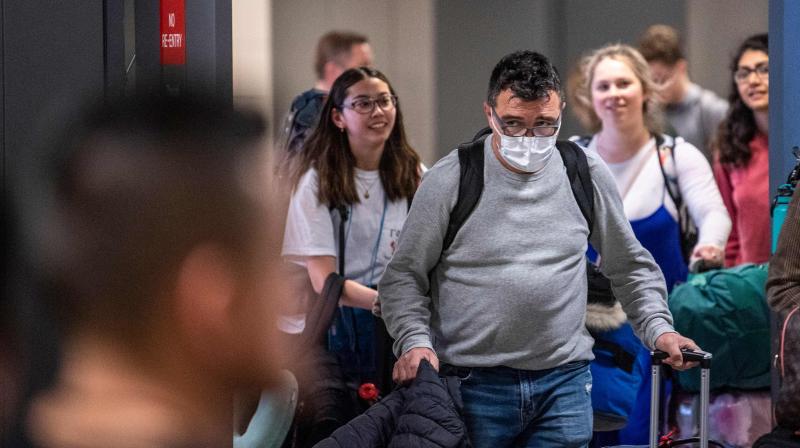 A passenger arriving from Brussels wearing a mask to protect himself from the new coronavirus looks for his relatives in the International arrivals zone at Dulles airport outside Washington. AFP Photo

Washington: US President Donald Trump declared a national state of emergency as the World Health Organization named Europe the new epicenter of the coronavirus Friday, with countries sealing borders, shutting schools and canceling events in a frenzied attempt to slow the ballooning pandemic.

The measure came as infections and deaths soared in Europe, with WHO chief Tedros Adhanom Ghebreyesus saying the continent now had "more reported cases and deaths than the rest of the world combined, apart from China."

He described it as a "tragic milestone", and warned that it was impossible to say when the virus would peak globally.

The overall death toll jumped to more than 5,000 across the world, including nearly 1,500 in Europe, with total infections topping 140,000 internationally, according to an AFP tally based on official sources.

Trump said the US would buy large quantities of crude oil for strategic reserves and waived student loan interest during the coronavirus crisis, stressing that the "next eight weeks were critical."

Leaders of the G7, the world's richest economies, will hold an extraordinary summit via videoconference on Monday to discuss the pandemic.

The outbreak reached new heights with several public figures from Hollywood actors to politicians and even the Canadian first lady catching the infection.