World   Americas  14 Aug 2018  Over 100, including Indians, detained for illegally entering, living in US
World, Americas

Over 100, including Indians, detained for illegally entering, living in US 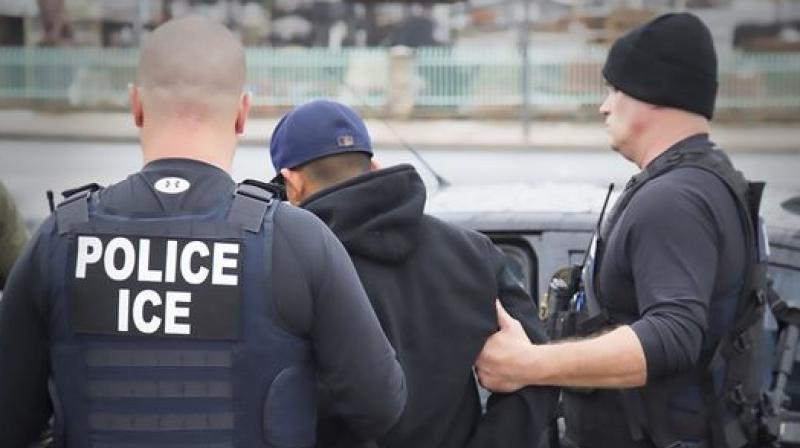 Federal Officers from US Immigration and Customs Enforcement's (ICE) Enforcement and Removal Operations (ERO) arrested 45 people in the Houston area for violating US immigration laws during a five-day enforcement action. (Photo: File | AFP)

New York: Over 100 people, including some Indians, have been detained by the US border patrol and immigration officials in separate enforcement actions for illegally entering and living in the country.

Federal Officers from US Immigration and Customs Enforcement's (ICE) Enforcement and Removal Operations (ERO) arrested 45 people in the Houston area for violating US immigration laws during a five-day enforcement action.

The agency did not give the total number of Indian nationals arrested during the operation.

The local enforcement operation targeted at-large criminal aliens, many of whom had absconded from prior immigration proceedings, it said.

The agency said some of the individuals arrested during the operation will face federal criminal prosecution for illegal entry and illegal re-entry after deportation.

Arrestees who are not being federally prosecuted, will be detained in ICE custody and administratively processed for removal from the US, it said.

In a separate action, US Border Patrol agents discovered 78 illegal aliens inside a locked refrigerated trailer at a checkpoint in Texas last week.

The illegal aliens were found in good health and identified as being from the countries of Mexico, Guatemala, Honduras, El Salvador, Brazil, Ecuador, India and Dominican Republic.

"These criminal organizations continue to use tractor trailers and view these individuals as mere commodities without regard for their safety.

"The blatant disregard for human life will not be tolerated. We will continue to work with our law enforcement partners to disrupt and dismantle these organizations and prosecute those responsible," said Laredo Sector, Acting Chief Patrol Agent Jason Owens.

Earlier, nearly 100 Indians, mostly from Punjab, were detained at two immigration detention centres for illegally entering the US through its southern border.

President Donald Trump had reversed his controversial decision on immigration by signing an executive order to end the separation of immigrant families on the US-Mexico border, following widespread protests against the move of his administration to separate children from their parents who illegally enter the country.