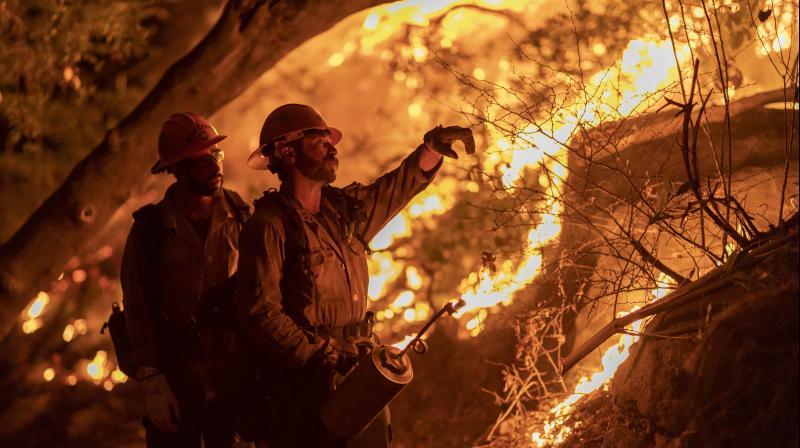 Mill Creek Hotshots set a backfire to protect homes during the Bobcat Fire on September 13, 2020 in Arcadia, California. California wildfires that have already incinerated a record 2.3 million acres this year and are expected to continue till December. The Bobcat Fire, burning in the San Gabriel Mountains, has grown to about 32,000 acres and is only 6% contained. (AFP)

Portland: President Donald Trump was due Monday to visit California for a briefing on record wildfires that have killed 35 people, as West Coast officials and political opponents accused him of being in denial about climate change.

The history-making blazes have now burned through nearly five million acres (two million hectares) across the US West, torching an area roughly the size of the state of New Jersey, with fears the death toll may rise.

Kamala Harris, the Democratic vice-presidential candidate who tweeted that Trump "denied evidence" the flames were "intensified by the climate crisis," is also set to tour the damage, as the infernos ignite a political conflagration.

"This is climate change, and this is an administration that's put its head in the sand," Eric Garcetti, the Democratic mayor of Los Angeles, told CNN's "State of the Union" Sunday.

Of at least 35 people killed by the blazes since the beginning of summer, 27 died this week alone. Dozens were still missing on Sunday.

Trump has made little comment about the blazes in recent weeks, but at a Nevada campaign event on Saturday he acknowledged the scope of the disaster.

"They never had anything like this," said Trump, who systematically downplays global warming. "Please remember the words, very simple, forest management."

He plans to meet Monday with the heads of California's emergency services, while California senator Harris will tour the damage a day later.

Garcetti hit back at the president's earlier remarks, saying that "anybody that lives in California is insulted by that."

"Talk to a firefighter if you think that climate change isn't real... This isn't about forest management or raking."

With battle lines drawn ahead of November's election, Democratic presidential candidate Joe Biden is also due to address the wildfires and their cause Monday.

He recently called the threat of climate change "undeniable" and "existential."

Much of the West Coast remained coated in dense smog through Sunday, with Portland by a distance the world's most air-polluted city according to IQAir.

"It's maddening right now we have this cosmic challenge to our communities, the entire West Coast of the United States on fire, to have a president to deny that these are not just wildfires, these are climate fires," he said.

Most of the fatalities have occurred in California and Oregon, with emergency services in the two states recording 34 deaths.

More than 30,000 firefighters are battling the blazes, with officials warning that improved weather could end Monday as windier conditions return to the dry region.

Residents of Arcadia, on the outskirts of Los Angeles, were ordered to evacuate Sunday as the nearby Bobcat Fire spread south through forested terrain toward the metropolis.

Two new deaths were confirmed from the North Complex Fire, which swept at unprecedented speeds this week into areas already ravaged less than two years ago by the Camp Fire -- California's deadliest ever blaze.

"There are still active fires, power lines are down, trees are down, there are roads that are impassable," said Sheriff Kory Honea, warning evacuees it could take "weeks and weeks" to return to their homes.

Paul Clement described to AFP how he fled his home in Berry Creek.

"When I came around the bend, everything was on fire -- an entire hillside. So I ended up driving through and you couldn't see fifty feet (15 meters)."

"It was worse than the Camp Fire, which I didn't think was possible."

California has seen 3.3 million acres burn -- an annual record, with more than three months of the fire season still to come -- and over 4,100 structures destroyed.

Near the Beachie Creek Fire, east of Oregon state capital Salem, police had set up multiple roadblocks on Sunday. Long lines of cars stretched in front of them, waiting in the thick fog to pass through.

Many were farmers trying to go home and feed their livestock.

"We went back to Mill City this morning, but police advised us not to as it is dangerous," resident Elaina Early told AFP. "The house is ok, but we leave now because the conditions are really not good."

Preparations have been hampered by online claims that "extremists" are intentionally setting fires in Oregon, rumors debunked by the FBI.