The death toll rose to 33 with a 14-year-old boy's body reportedly being recovered in Mendocino county near his family's home. 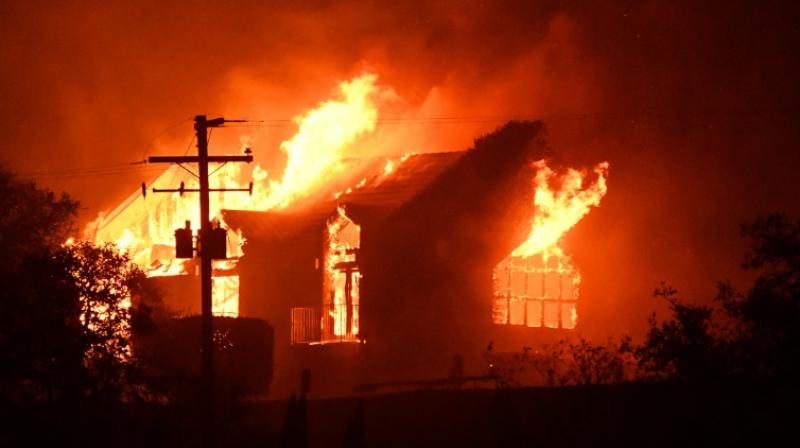 San Francisco: The death toll from California's wildfires has risen to 33 as firefighters made some progress in containing the infernos but said intensifying winds were a concern.

"We're not out of this emergency, not even close," said Mark Ghilarducci, director of the California Governor's Office of Emergency Services.

"But we are seeing some progress in areas the fires have impacted," Ghilarducci told a news conference. "We'll get ahead of these flames."

California fire chief Ken Pimlott said more than 9,000 firefighters were battling 17 large fires that have consumed a total of 221,754 acres (89,700 hectares) since Sunday.

An estimated 5,700 structures have been destroyed by the wildfires, up from 3,500 reported on Wednesday, CAL FIRE said on its Twitter account.

The death toll rose to 33 with a 14-year-old boy's body reportedly being recovered in Mendocino county near his family's home.

"It appears he was attempting to evacuate the area on foot when he was overtaken by the fire," the Mendocino County Sheriff's office told the Ukiah Daily Journal.

Sonoma County officials earlier on Friday reported another death, which had brought the total to 32.

"We have had some significant progress," Pimlott said.

"Three smaller fires have been contained," he said, and "we've increased containment on some of the major fires."

Pimlott said firefighting efforts could be complicated, however, by winds that were expected to increase overnight to more than 72 kilometers per hour.

Pimlott also said it could be weeks before investigators determine what caused the fires, the deadliest in California's history.

The Griffith Park fire in Los Angeles County in 1933 killed at least 29 people, and 25 people died in the 1991 Oakland Hills fire.

Sonoma County Sheriff Rob Giordano said his department was continuing to track down people reported missing by family or friends.

The Sonoma County Sheriff's Department had received 1,308 missing persons reports so far and 1,052 people have been located, Giordano said.

Evacuation orders remained in place meanwhile for several towns in California's wine-producing Napa and Sonoma counties, where hundreds of people have already lost their homes to the fast-moving infernos.

More than 3,500 homes and businesses have been destroyed across the state.