'Kashmir an integral part of India,' says Indian columnist at US Congress

This was the second hearing by US Congress in the last three weeks on Kashmir, which has been under restrictions since August 5. 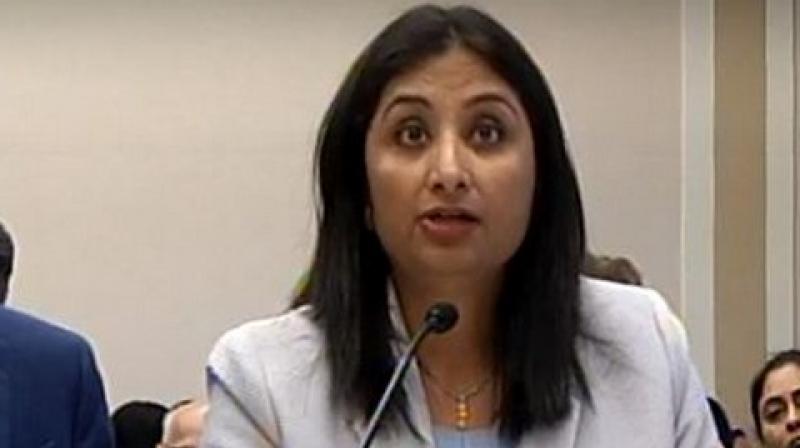 She said that the international community has to assist India in eradicating radical Islamist terror that is when the human rights situation will be possible. (Photo: ANI)

New Delhi/Washington: In a US Congressional hearing on Human Rights in Washington on Thursday, a columnist Sunanda Vashisht said India has successfully defeated insurgencies in Punjab and Northeast and it was time to strengthen Delhi’s fight against insurgencies in Kashmir.

In a hearing organised by Tom Lantos HR Commission, she said: "India's democratic credentials are unmatched. The country has successfully, in a democratic setup, defeated insurgencies in Punjab and the northeast. It is time to strengthen India against such insurgencies and the human rights problems will be solved forever."

"We are dealing with Islamic terrorism in Kashmir," Vashisht told the panelists.

"We have to be cognizant of the fact. All deaths have been happening due to terrorists trained by Pakistan. This doublespeak is not helping India in any way," the columnist stressed before the gathering.

She said that the international community has to assist India in eradicating radical Islamist terror that is when the human rights situation will be possible.

"Plebiscite in Kashmir is never going to happen," she said. A plebiscite requires the entire community to unite for a decision, but in this case, a part of Kashmir is in India, another in Pakistan, a part of it is also held with China, Vashisht added.

She said India has "not occupied" Kashmir and Kashmir was always an integral part of India, adding "India is not just a 70-year-old identity, but a 5000-year-old civilisation. There is no India without Kashmir, and no Kashmir without India."’

Kashmir has witnessed a similar level of horror and brutality as inflicted by the Islamic State in Syria, prior to the time when the West and other international communities were apprised about the worst human rights situation in the Valley, claimed Kashmir columnist Sunanda Vashisht.

"We have seen ISIS level of horror and brutality in Kashmir, 30 years before the West was even introduced to the brutalities of radical Islamic terror. I am glad these hearings are happening here today because when my family and everyone like me lost our homes our livelihood and our way of life the world remained silent," Vashisht told a Congressional hearing on Human.

Vashisht also questioned what she called the silence of world leaders when some 400,000 Kashmiri Hindus were driven out of the Valley in the 1990s, when Pakistan-backed terrorists started targeting the community.

During the hearing, she emphasised and asked: "Where were the advocates of human rights when my rights were taken away? Where was the saviour of humanity when my feeble old grandfather stood with kitchen knives and an old rusted axe ready to kill my mother and I in order to save us from the much worse fate that awaited us? All deaths have been happening due to terrorists trained by Pakistan. This doublespeak is not helping India in any way."

Around 400,000 Kashmiri Hindus fled right after the night of horror.

"They survived. Those who didn't were killed. Today, 30 years later, I am still not welcome in my home in Kashmir. I am not allowed to follow my faith there. My house in Kashmir is illegally occupied as most others in my communities. And those which were not occupied have been burnt down or ransacked," she told the hearing.

This was the second hearing by US Congress in the last three weeks on Kashmir, which has been under restrictions since August 5, when the Indian government announced the end of special status to the state.

In response to the columnist, Sheila Jackson Lee, a Congresswoman from Texas asked for a pathway to ensure human rights in the region. She also asked the Indian government to allow members of the US Congress to visit the region.

Some US lawmakers have expressed concern about the situation in Jammu and Kashmir amid security restrictions. For over 100 days, there have been restrictions on internet and mobile phones in the Valley and several mainstream politicians remain in detention.