The teenaged gunman, whose name was not provided by police, survived the self-inflicted gunshot wound to the head. 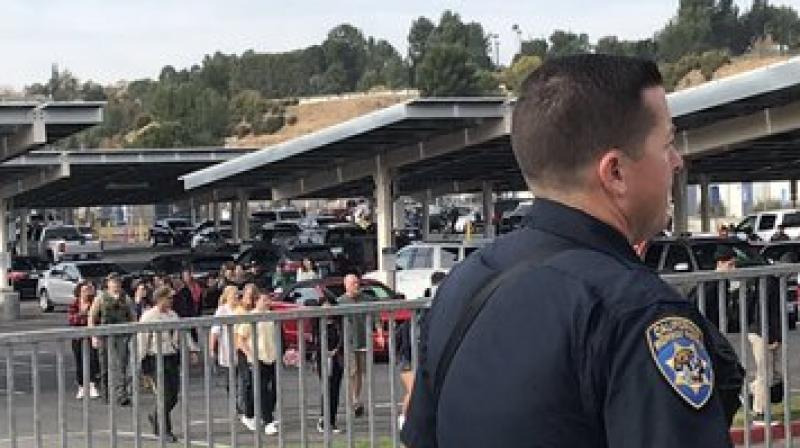 Captain Kent Wegener of the Los Angeles County Sheriff's Department told reporters the entire incident, captured on videotape, took 16 seconds as the young man stood in one spot and fired on one student after another. (Photo: Twitter)

He saved the last bullet for himself. It was his 16th birthday.

The teenaged gunman, whose name was not provided by police, survived the self-inflicted gunshot wound to the head but was in grave condition in hospital, law enforcement officials said.

Captain Kent Wegener of the Los Angeles County Sheriff's Department told reporters the entire incident, captured on videotape, took 16 seconds as the young man stood in one spot and fired on one student after another.

"From right where he was standing, he doesn't chase anybody, he fires from where he is until he shoots himself," Wegener said.

The scene at Saugus High School was reminiscent of other mass shootings at US schools, including Marjory Stoneman Douglas High School in Parkland, Florida, where a former student with an assault gun killed 17 people on Feb. 14, 2018.

Wegener confirmed the suspect posted a message on his Instagram account before the shooting that said: “Saugus have fun at school tomorrow.” The post was later taken down.

Investigators said they did not yet know what led the student to open fire at the school 40 miles (65 km) north of Los Angeles.

Police said the accused shooter had acted alone. Investigators descended on his family home, blocking off the street. They found no further danger there.

A next-door neighbour, registered nurse Jared Axen, said the suspect had seemed introverted, quiet and sad, possibly despondent over the loss of his father from a heart attack in December 2017.

Axen, 33, said it was the boy who found his father deceased, not long after the older man had regained his sobriety and gotten his life "back on track" after years of struggling with alcohol abuse.

"I would say he (the boy) was hurting and couldn’t ask for help," Axen said of the suspect, who was a track athlete at the school, involved in Boy Scouts and liked the outdoors, going on hunting trips with his father.

He was of mixed race, born to Japanese-born mother and white father, with an older sister who became a nurse and moved away.

"I would ask him how school was ... he would never bring up concerns of bullying or being a loaner there," Axen said.

There was no immediate word on where the teen gunman obtained the weapon.

"How do we come out of tragedy? We need to say 'No more!' This is a tragic event. It happens too frequently," said Captain Robert Lewis of Santa Clarita Valley sheriff's station, striking an emotional note in an otherwise somber news conference.

A 16-year-old Saugus High School junior named Pamela, who spoke to Reuters on condition that she not give her last name, said she was in her first-period choir class when some girls ran into the room and said there was a shooting going on.

"Our teacher immediately grabbed a fire extinguisher and got us into her office and locked the door," Pamela said, adding that one of the girls had been shot in the shoulder.

Taylor Hardges reported seeing people running in the hallways shouting "Run!" She raced into a classroom, where a teacher barricaded the room.

"We've had drills. It doesn't prepare you for the real thing," she said after reuniting with her father at a designated spot in Santa Clarita's Central Park.

Her father, Terrence Hardges, said he felt his heart race after Taylor texted him from inside the classroom with the message: "I love you. I'm pinned in a room. We're locked in."

The shooting at Saugus was the 85th incidence of gunfire at a school this year, according to Everytown, a gun control advocacy group. It seems sure to reignite a debate over gun control in the 2020 presidential election.

This year marks the 20th anniversary of the shooting at Columbine High School, where two teenagers went on a rampage, fatally shooting 12 students and a teacher and wounding more than 20 others before killing themselves.