US hits Russians with sanctions for election meddling, cyber attacks

While Trump has frequently called the Russia probe a ‘witch hunt,’ the new sanctions appear to affirm Mueller’s investigative strategy. 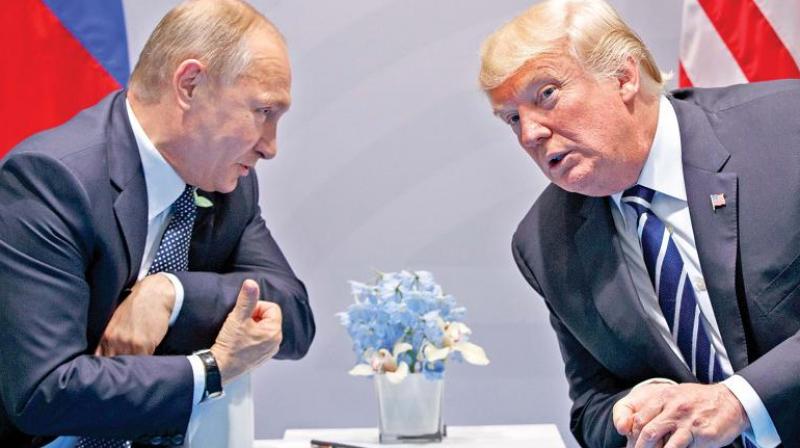 Donald Trump has faced fierce criticism in the United States for doing too little to punish Russia for the election meddling and other actions. (Photo: File)

Washington: The United States on Thursday took its most notable action against Russia since Donald Trump became president, slapping sanctions on a group of Russian individuals and entities, including Moscow’s intelligence services, for meddling in the 2016 US election and malicious cyber attacks.

Thursday’s announcement marked the first time that the US government stated publicly that Russia had attempted to break into the American energy grid, which US security officials have longed warned may be vulnerable to debilitating cyber attacks from hostile adversaries.

Trump has faced fierce criticism in the United States for doing too little to punish Russia for the election meddling and other actions, and a special counsel is looking into whether Trump’s campaign colluded with the Russians, an allegation the president denies.

Combined with the United States joining Britain in blaming Moscow for poisoning a former Russian spy in southern England, the actions represented another plunge in US-Russian relations despite Trump’s stated desire for improved ties.

Trump has frequently questioned a January 2017 finding by US intelligence agencies that Russia interfered in the 2016 campaign using hacking and propaganda in an effort eventually aimed at tilting the race in Trump’s favour. Russia denies interfering in the election.

But Mnuchin was unequivocal in saying that Thursday’s Treasury action "counters Russia’s continuing destabilizing activities, ranging from interference in the 2016 election to conducting destructive cyber-attacks."

A senior administration official told Reuters that Trump, who campaigned on warmer ties with Putin, has grown exasperated with Russian activity.

While Trump has frequently called the Russia probe a "witch hunt," the new sanctions appear to affirm Mueller’s investigative strategy.

Trump told reporters during a White House event with Irish Prime Minister Leo Varadkar that "it certainly looks like the Russians were behind" the use of a nerve agent to attack Sergei Skripal, a former Russian double agent in England.

Trump called it "something that should never, ever happen, and we’re taking it very seriously, as I think are many others."

A senior administration told reporters on a conference call that Russian actors infiltrated parts of the US energy sector.

Mnuchin said there would be additional sanctions against Russian government officials and oligarchs "for their destabilizing activities." Mnuchin did not give a timeframe for those sanctions, which he said would sever the individuals’ access to the US financial system.

Thursday’s action blocks all property of those targeted that is subject to US jurisdiction and prohibits American citizens from engaging in transactions with them.

The Treasury Department said the sanctions were also meant to counter destructive cyber attacks including the NotPetya attack that cost billions of dollars in damage across Europe, Asia and the United States. The United States and Britain in February attributed that attack to the Russian military.

Both Republicans and Democrats in the US Congress, which nearly unanimously passed a new sanctions bill against Russia in summer 2017, had criticized Trump for not punishing Moscow. The Trump administration in January did not announce sanctions against Russia, for now, under the new law.

Republican Ed Royce, chairman of the House of Representatives Foreign Affairs Committee, welcomed the new sanctions as an important step. "But more must be done," Royce said in a statement, promising that his committee would "keep pushing to counter Russian aggression."

The Treasury Department said it would keep pressure on Russia for its ongoing efforts to destabilize Ukraine and occupy the Crimea region, as well as corruption and human rights abuses.