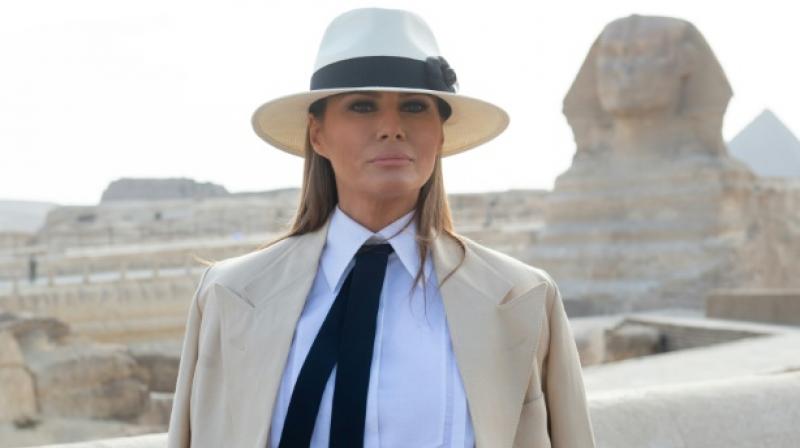 Ricardel had reportedly rowed with Melania Trump's staff over seating allocations on the plane taking the first lady on an Africa tour in October. She was also blamed for negative news coverage. (Photo: AFP)

Washington: In the White House this week, Trump's the boss. Melania Trump, that is.

After two years of being American politics's biggest enigma, the first lady has broken cover with her startling demand to get a senior advisor to the president thrown out.

First ladies often wield power -- they have the ear of the president, and more, after all -- but they rarely intervene so directly. And never publicly.

So Melania's demand on Tuesday that deputy national security advisor Mira Ricardel step aside gave the White House a shake.

Donald Trump's entire leadership style is based on him being the center of attention.

Suddenly, Washington's focus was on his wife and her declaration that Ricardel "no longer deserves the honor of serving in this White House."

What would he do?

A little more than 24 hours passed before the answer came: Ricardel was leaving the White House for an unspecified job somewhere else.

Ricardel wasn't some minor player. She was deputy to the powerful national security advisor John Bolton.

Her sin? Reportedly rowing with Melania Trump's staff over seating allocations on the plane taking the first lady on an Africa tour in October, as well as being blamed for negative news coverage.

"It's not unusual" for a first lady to weigh in on a president's staff, said Kate Andersen Brower, author of "First Women: The Grace and Power of America's Modern First Ladies."

She recalled a famous incident when Nancy Reagan got Ronald Reagan's chief of staff Don Regan axed. But that was done behind the scenes.

"It is unprecedented for a first lady to issue a statement demanding that her husband fire someone. That is jaw dropping," Brower said.

Melania Trump's move was notable not just for how high up and how decisively she struck but the timing.

Bolton, one of the most powerful members of Trump's inner circle, had reportedly been trying to shield his deputy. So Melania Trump waited until Bolton was safely away on a trip in Asia.

Brower calls Melania Trump "private to the point of being reclusive."

That has left others to define her, often based on absurdly tiny scraps of information.

Some claim to detect cryptic signals in which she seeks rescue from her marriage. Or that she is primed to rebel against a man who went through two marriages before finding the Slovenian former fashion model 23 years his junior.

This year, Melania Trump began putting some of her own markers down.

Even then, though, confusion reigned.

Her decision to wear a jacket inscribed with the phrase "I really don't care do U?" while visiting detained immigrants on the Mexican border completely threw the public and media.

Speculation erupted that Melania was trolling her husband over his hardline anti-immigrant policies. Later she stated that she was actually aiming at hostile media coverage.

In October, she toured four African countries on a voyage ostensibly to promote her anti-bullying and child welfare campaign "Be Best."

Clearly the trip clearly also served to bring her out of her husband's shadow, but it still left many mysteries about the first lady's views and character -- a point neatly illustrated when she posed in front of the original Sphinx in Egypt.

Returning from Africa, Melania Trump made a splash with a lengthy ABC television interview in October in which she continued to shape her public profile.

Pushing back against the idea of there being any division between her and Donald Trump, she said that infidelity allegations against him were not "a concern."

She instead blamed the media for the controversies around her, calling herself "the most bullied person in the world."

This week, she transformed her image again, looking not so much persecuted as powerful.

But questions are being raised about how a more assertive Melania Trump can work in an institution so thoroughly dominated by her husband.

CNN claimed Thursday that Trump was angered by the Ricardel row because "he was made to look like a boss-around husband."

And Katherine Jellison, a historian specializing in first ladies at Ohio University, warns that Melania risks losing her best attribute -- her coolness "in contrast to her husband's bombastic personality."

"She might end up being more of a hindrance than an asset to her husband," Jellison said. "In the current environment, the Trump family can use all the good will they can get."