I inherited 'a mess' at home and abroad: Donald Trump

Trump said companies are leaving America and jobs are going to Mexico and other places. 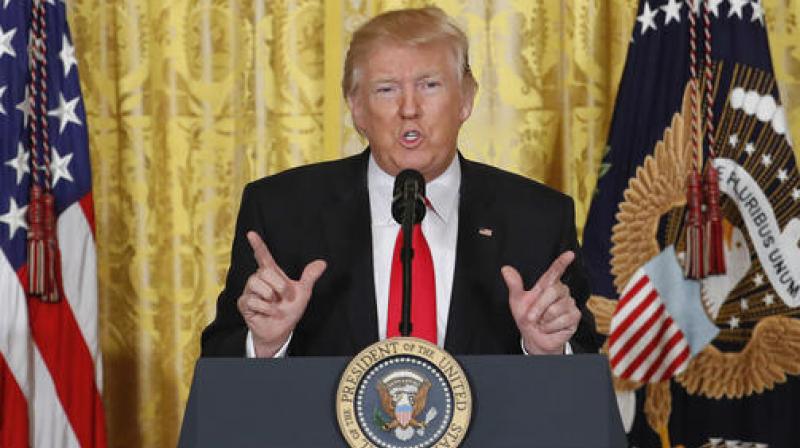 "As you know, our administration inherited many problems across government and across the economy. To be honest, I inherited a mess. It's a mess. At home and abroad, a mess," Trump said, speaking at his first solo news conference.

He said companies are leaving America and jobs are going to Mexico and other places.

"Jobs are pouring out of the country; you see what's going on with all of the companies leaving our country, going to Mexico and other places, low pay, low wages, mass instability overseas, no matter where you look. The middle East is a disaster. North Korea. We'll take care of it, folks. We're going to take care of it all," he said at the news conference.

"I just want to let you know, I inherited a mess. Beginning on day one, our administration went to work to tackle these challenges," he said.

Trump said on foreign affairs, his administration has already begun "enormously productive" talks with many foreign leaders, to move forward towards stability, security and peace in the most troubled regions of the world.

"We have had great conversations with the UK, and meetings. Israel, Mexico, Japan, China and Canada, really, really productive conversations. I would say far more productive than you would understand," he said.

have to find out what's going on because the press honestly is out of control."

"Unfortunately, much of the media in Washington DC, along with New York, Los Angeles in particular, speaks not for the people, but for the special interests and for those profiting off a very, very obviously broken system," he alleged.

He said the steps he has taken in the four weeks since he was sworn in "should surprise nobody, especially in the media."

"In other words, the media is trying to attack our administration because they know we are following through on pledges that we made, and they are not happy about it, for whatever reason," he said. "But a lot of people are happy about it."

Asserting that ISIS has spread like a cancer, he said he has directed his Defence Secretary Gen (rtd) Jim Mattis to submit a plan to defeat the terror group.

Alleging that Iran is the "world's top sponsor of terrorism", he said he has imposed new sanctions on the country, which has "totally taken advantage" of the previous administration.

"We are not going to stop until that problem is properly solved. It is not properly solved now, it's one of the worst agreements I've ever seen drawn by anybody," he said. Trump said he ran for President to present the citizens of his country.

"As a result, the media is going through what they have to go through too often times distort, not all the time and some of the media is fantastic, I have to say, they're honest and fantastic," Trump said.