International Yoga Day celebrated In US

More than 1500 people participated in the celebrations organised by the Indian Embassy. 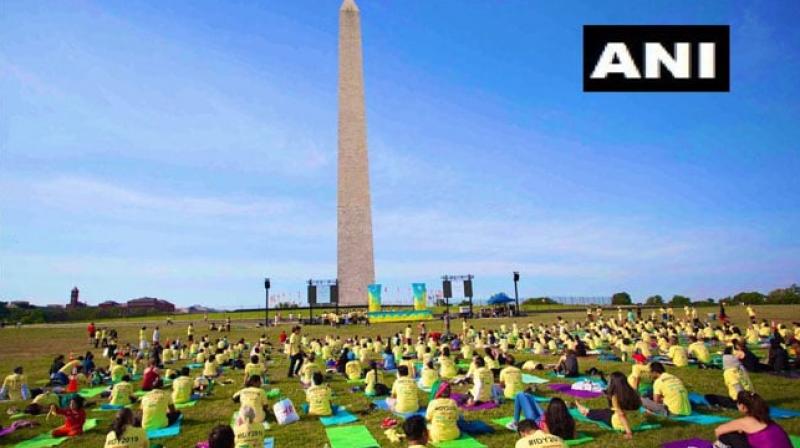 More than 1500 people participated in the celebrations organised by the Indian Embassy. (Photo: ANI)

Washington: Thousands of people, from all walks of life, participated in International Day of Yoga celebrations here on Sunday.

"We are very happy with the support and participation that we saw today. The participants participated with real zeal and enthusiasm. In Washington, there is nothing better than iconic Washington Monument, it denotes the capital of the US and it is a spot that represents the city and the country." the Indian Ambassador to the US, Harsh Vardhan Shringla, told news agency ANI.

The Indian Ambassador also addressed the gathering. Welcoming the participants, Mr Shringla noted that yoga is widely embraced by the American people as a survey conducted in 2016 showed that there were 36.7 million Yoga practitioners in the US making America the second home for Yoga.

"Yoga is a way of life in the United States, it has become trendy, popular and almost something that people believe in keeping their body in a harmonious position and this has helped us to promote Yoga in the US," he added.

The programme started with playing of an audio-video message from Prime Minister Narendra Modi.

Greeting yoga lovers all over the world, PM Modi explained yoga's role in achieving ''oneness.'' He also emphasized that yoga is not just a set of exercises but also a passport to health assurance.

The Ambassador then engaged with the yoga enthusiasts. He performed Surya Namaskar and recited a few verses from the holy Bhagwad Gita.

Amongst the participants were some special guests- the ambassador of Myanmar, ambassador of Vietnam, officials and representatives from the State Department, World Bank, academic institutions and think tanks.

A guided yoga session based on ''Common Yoga Protocol'' created by the Government of India was conducted with the help of yoga demonstrators. The yoga session concluded with Sanskrit shlokas.

The Indian Embassy in Washington took the Yoga day Celebrations a notch higher by organising the Indian Vegetarian Food Festival hosted in association with Freer Sackler gallery, adjacent to Washington Memorial, that was rolled out for all participants post the yoga event.

"The food programme is related to yoga. Vegetarian cuisine in India is very refined cuisine and not enough is known about it. Therefore, we have arranged for five different stalls representing cuisines from five different parts of India-- North, South, East, West and a specialised one," Mr Shringala said.

"We want to introduce a finer vegetarian cuisine for the people here. This food festival also commemorates the 150th birth anniversary celebrations of Mahatma Gandhi," he added.

The International Day of Yoga will mark its fifth anniversary this year on June 21.