Disa Alexander was hiking to the swimming area where Ellison Creek and East Verde River converge when the water suddenly surged. 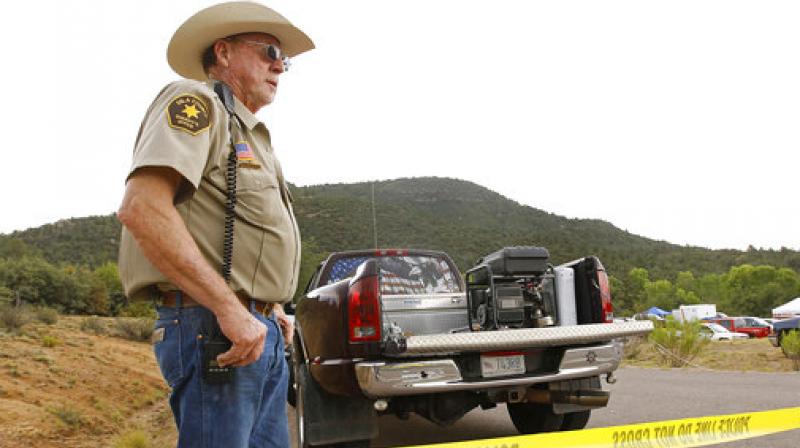 Gila County Sheriff's Office deputy Larry Hassinger stands watch at the entrance to the First Crossing recreation area during a search and rescue operation for victims of a flash flood along the banks of the East Verde River. (Photo: AP)

Tonto National Forest: Nine people died and a 13-year-old boy was missing after their group of family and friends was swept away while cooling off in a creek that suddenly turned treacherous when a rainstorm upstream unleashed floodwaters in Arizona's Tonto National Forest.

Gila County Sheriff's Detective David Hornung said that the group from the Phoenix and Flagstaff areas had met up for a daytrip along the popular Cold Springs  swimming hole near Payson in central Arizona and were playing in the water Saturday afternoon when muddy flood waters came roaring down the canyon.

The group, ranging in age from 2 to 60, had set out chairs to lounge on a warm summer day when miles upstream an intense thunderstorm dumped heavy rainfall on the mountain.

Disa Alexander was hiking to the swimming area where Ellison Creek and East Verde River converge when the water suddenly surged. She was still about two miles away when she spotted a man holding a baby and clinging to a tree. His wife was nearby, also in a tree. Had they been swept downstream, they would have been sent over a 20-foot waterfall, Alexander said.

Alexander and others tried to reach them but couldn't. Rescuers arrived a short time later. "We were kinda looking at the water; it was really brown," she said.

"Literally 20 seconds later you just see like hundreds of gallons of water smacking down and debris and trees getting pulled in. It looked like a really big mudslide."

Video she posted to social media showed torrents of water surging through jagged canyons carved in Arizona's signature red rock. "I could have just died!" Alexander exclaimed on the video, which shows the people in the tree and then rescuers arriving on the scene.

A boy Alexander described as the couple's son was on the rocks above the water.

Search and rescue crews, including 40 people on foot and others in a helicopter, recovered the bodies of five children and four adults, some as far as two miles down the river. Authorities did not identify them.

Four others were rescued Saturday and taken to Banner hospital in nearby Payson for treatment of hypothermia.

Rescuers got to the four victims quickly after the crew heard their cries while they were nearby helping an injured hiker. Daniel Bustamante, 16, sat on a bench with his friend Daniel Rodriguez outside the local mortuary in Payson where victims were brought. He said he came from Phoenix after getting a Snapchat message from a friend.

Some know it was as Ellison Creek or Water Wheel swimming holes. Hornung said the treacherously swift waters gushed for about 10 minutes before receding in the narrow canyon. He estimated floodwaters reached six feet high and 40 feet wide.

The National Weather Service, which had issued a flash- flood warning, estimated up to 1.5 inches of rain fell over the area in an hour.

The thunderstorm hit about 8 miles upstream along Ellison Creek, which quickly flooded the narrow canyon where the swimmers were.

"They had no warning. They heard a roar, and it was on top of them," Water Wheel Fire and Medical District Fire Chief Ron Sattelmaier said.