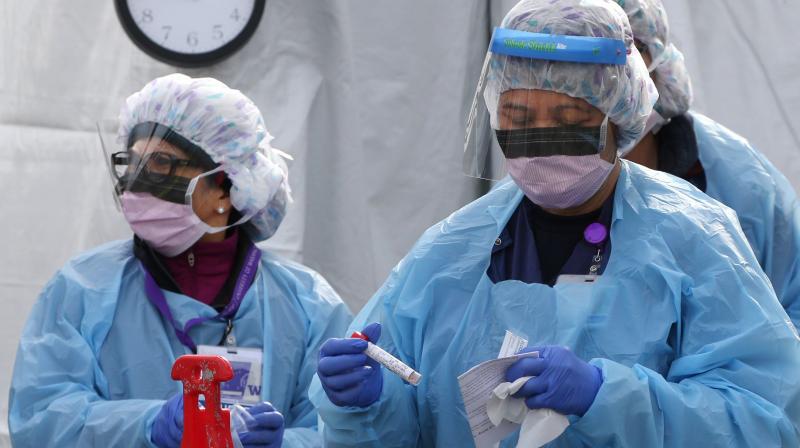 Nurses process a sample for COVID-19 after a patient was screened at an appointment-only, drive-up clinic set up by the University of Washington Medical Center Northwest Outpatient Medical Center in Seattle, Washington. AFP Photo

The number of deaths due to the new coronavirus in the US has reached 105, with the outbreak spreading to all 50 states, even as President Donald Trump mounted a warlike effort to contain the situation, including an economic stimulus package of USD1 trillion.

The first fatality from COVID-19 was reported from the Washington state on February 26. Less than a month later, the toll has crossed 100. As of March 17, the figure stood at 105 and the number of confirmed infections crossed 6,500.

New York in the East Coast and Washington in the West are the two states that took major hits due to the coronavirus.

According to The Washington Post, most of the deaths have occurred in people over 70 and those with underlying conditions.

"Public health experts believe the initial and ongoing testing problems mean that unknown numbers of cases have gone undetected, and they say the death toll will only continue to rise," Politico reported.

President Trump has urged people to avoid gatherings of more than 10 persons. He asked them to stay indoors and work from home as much as possible. Schools, offices, bars, restaurants and many stores remain closed across the United States.

In the Silicon Valley, more than seven million people have been asked to stay indoors. Curfew has been imposed in New Jersey. Several states and cities are considering taking similar measures.

Several US senators wrote to Trump, urging him to use his authority to help address the widespread shortages of medical equipment caused by the COVID-19 outbreak.

"There are widespread reports of shortages in personal protective equipment (PPE), ventilators, diagnostic test kits, and other medical supplies that require medical professionals to ration existing supplies," the Senators wrote.

US Defense Secretary Mark Esper said the military would provide up to five million respirator masks. He said the Pentagon will also provide items of personal protective equipment to safeguard front-line responders and up to 2,000 specialised ventilators.

Pentagon would open up as many as 16 labs to test civilians for the virus and potentially call up more members of the National Guard and Reserve, Esper told reporters.