The US and India are cross-screening known, suspected terrorists, and later this year, will convene new dialogue on terrorist designations. 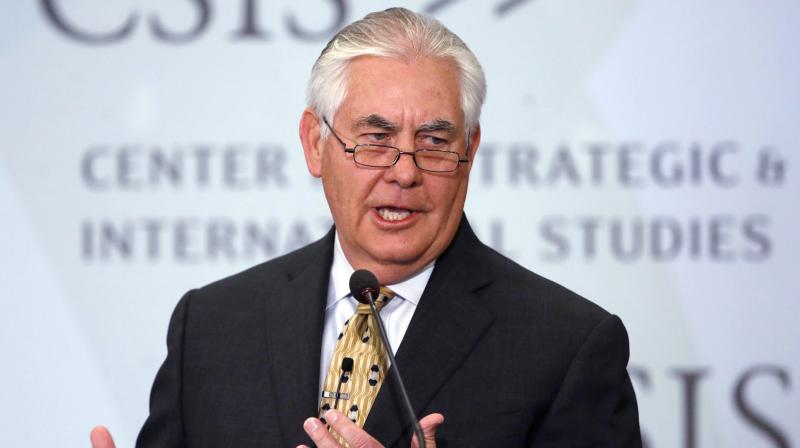 Secretary of State Rex Tillerson also said that states that use terror as an instrument of policy will only see their international reputation and standing diminish, in an apparent dig at Pakistan. (Photo: AP)

Washington: Secretary of State Rex Tillerson on Wednesday said the US expects Pakistan to take decisive action against terrorists and such a move will improve Islamabad's international standing as well as stability in the region.

He also said that states that use terror as an instrument of policy will only see their international reputation and standing diminish, in an apparent dig at Pakistan.

"We expect Pakistan to take decisive action against terrorist groups based there that threaten its own people and the broader region," he said while speaking at the Center for Strategic and International Studies, a top US think-tank.

"It is the obligation, not choice, of every civilised nation to combat the scourge of terrorism. The United States and India are leading that regional effort together," he said.

By taking decisive actions against terrorists, Tillerson said, Pakistan furthers stability and peace for itself and its neighbours, and improves its own international standing.

President Donald Trump in August unveiled his Afghanistan and South Asia policy in which he had hit out at Pakistan for providing safe havens to "agents of chaos" that kill Americans in Afghanistan and warned Islamabad that it has "much to lose" by harbouring terrorists.

America's relationships in the region stand on their own merits, Tillerson told the audience.

In his major India policy speech, Tillerson said India-US cooperation in the field of counter-terrorism has strengthened in recent years.

"In the past decade, our counter-terrorism cooperation has expanded significantly. Thousands of Indian security personnel have trained with American counterparts to enhance capacity," he said.

The US and India are cross-screening known and suspected terrorists, and later this year, the two countries will convene a new dialogue on terrorist designations, he said.

"We are coordinating our counter-terrorism efforts more than ever before," the secretary of state said.

In July, Tillerson said, he signed the designation of Hizbul Mujahidin as a Foreign Terrorist Organisation because the US and India stand shoulder-to-shoulder against terrorism.

Tillerson said India can serve as a clear example of a diverse, dynamic, and pluralistic country to others a flourishing democracy in the age of global terrorism.

The sub-continent is the birthplace of four of the world's major religions, and India's diverse population includes more than 170 million Muslims the third-largest
Muslim population in the world, he said.

"Yet we do not encounter significant numbers of Indian Muslims among foreign fighters in the ranks of ISIS or other terror groups, which speaks to the strengths of Indian society," said the top American diplomat.

Pakistan's Prime Minister Shahid Khaqan Abbasi last week warned that the Trump administration's desire to inject New Delhi in the war-torn country would be "detrimental" as he rejected any role for India in Afghanistan.