On Tuesday Trump walked back his comments, saying he accepted the view of US spies that Moscow had in fact meddled. 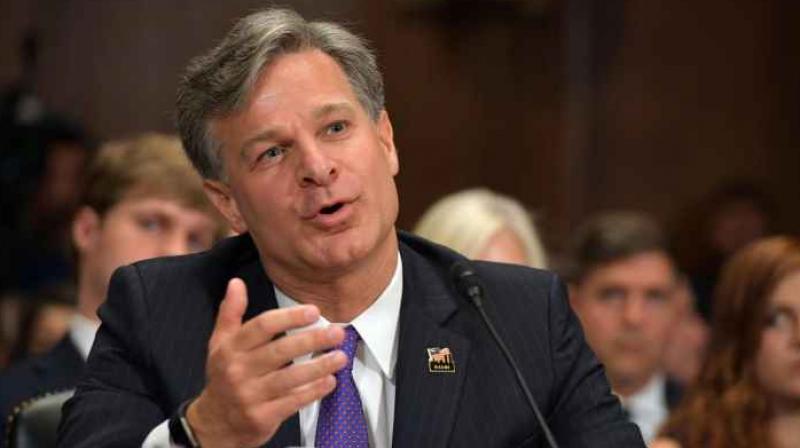 Asked if, amid intense criticism of the FBI by Trump, he had threatened to resign in recent months, Wray declined to answer directly. (Photo: File/AFP)

Washington: FBI director Christopher Wray said Wednesday that the US intelligence community stands by its view that Russia interfered in the 2016 US election, despite Vladimir Putin's denial this week to President Donald Trump.

"He's got his view, he has expressed his view," Wray said when asked about Putin's denial to Trump at their summit in Helsinki on Monday.

"The intelligence community's assessment has not changed. My view has not changed, which is that Russia attempted to interfere with the last election and that it continues to engage in malign influence operations to this day."

Those acts "aimed at sowing discord and divisiveness in this country," he added.

On Monday, Trump appeared to accept Putin's denial in a press conference after their meeting in Helsinki, sparking outrage in Washington and a rare statement of disagreement by the head of the US intelligence community, Director of National Intelligence, Dan Coats.

On Tuesday Trump walked back his comments, saying he accepted the view of US spies that Moscow had in fact meddled.

"I accept our intelligence community's conclusion that Russia's meddling in the 2016 election took place," Trump said, reading a statement from the White House.

Yet Trump continued to suggest doubts, adding: It "could be other people also; there's a lot of people out there."

Wray, who was speaking at the Aspen Security Forum in Colorado, also took issue with Trump's suggestion on Wednesday that Russia has not continued to interfere this year as the United State prepares for congressional elections in November.

Wray said that the FBI has not yet seen any specific actions targeting US election infrastructure -- compared to 2016, when Russian hackers targeted voter registration and voting management computers across the country, according to US intelligence.

"But certainly other efforts, what I would call malign influence operations, are very active. And we could be just a moment away from going to the next level," he said.

"For me, it's a threat that we need to take extremely seriously and respond to with fierce determination and focus."

Asked if he saw, like Trump, that other countries were involved, Wray said some countries would indeed try to influence US politics in various ways "going forward."

However, he added, "There is no question that Russia has been by far the most aggressive actor."

"It's not a witch hunt," he said, using Trump's words.

Asked if, amid intense criticism of the FBI by Trump, he had threatened to resign in recent months, Wray declined to answer directly.

In May 2017 Trump fired Wray's predecessor, James Comey after Comey refused to back off of the Russia probe.

Wray implied that he, too, would not bow to unreasonable pressure.

"I'm a low-key, understated guy. But that should not be mistaken for what my spine is made out of," he said.