Ilhan Omar, US congresswoman in eye of political storm

The Somali-born Muslim lawmaker came to the United States as a child and eventually won a seat in Congress. 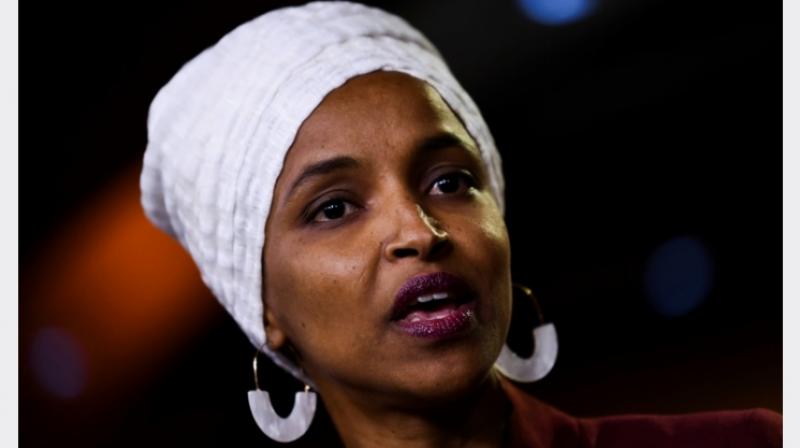 The Somali-born Muslim lawmaker came to the United States as a child and eventually won a seat in Congress. (Photo: AFP)

Washington: To her supporters, Ilhan Omar embodies the American dream, but to Donald Trump and his loyalists the refugee-turned-congresswoman has made clear with a string of controversial comments that she is a dangerous radical.

The Somali-born Muslim lawmaker came to the United States as a child and eventually won a seat in Congress.

On Thursday the first-term Democratic lawmaker became the focus of a raging debate on race and American values after Trump's supporters began chanting "Send her back!" at a campaign rally with the president.

One of four ethnic minority Democrats who have been targeted by Trump in recent days, the outspoken Omar hit back hard on Thursday, branding the president both a "racist" and a "fascist."

For many, Omar's story is quintessentially American: an immigrant accepted by neighbors with open arms who thrived, settling in Minnesota and making the best of her opportunities to become a trailblazing US political figure.

She is the first Somali-American in national politics, and one of the first two Muslim women ever to serve in Congress, a signal that adherents of Islam are gradually gaining acceptance in American society.

Omar was elected to the House of Representatives last November, and the chamber changed its rules to allow the wearing of a hijab, a head covering worn by some Muslim women, on the House floor.

But others see her as a divisive figure, an agent provocateur whose criticism of government policy in her adopted homeland -- be it towards the Middle East or on immigration -- has enraged Trump and his loyalists.

Her political rise has been steeped in controversy. In February, the 37-year-old sparked an uproar when she suggested money is why US politicians support Israel.

"It's all about the Benjamins baby," she tweeted.

The comment was among multiple unvarnished remarks seen by critics as discriminatory tropes aimed at Jews, and she was rebuked by leaders in both parties.

Omar apologized and said she was "listening and learning" from her peers.

But the following month she landed in hot water again, when a video went viral showing her using the phrase "some people did something" to allude to the attacks of September 11, 2001.

Her defenders said Omar was falsely accused of downplaying the attacks.

But Trump quickly claimed that Omar supported terrorists, and demanded she resign. Death threats against her soared.

"I took an oath to uphold the constitution. I'm as American as everyone else," Omar declared in April.

Omar was born in Mogadishu, and when she was eight her family fled Somalia's civil war. They spent four years at a refugee camp in Kenya before immigrating to the United States.

She quickly gained an affinity for American politics, serving as her grandfather's interpreter at caucus meetings as a teenager.

After years of Democratic activism she won a seat in the Minnesota state legislature in 2016.

Two years later she was elected to the US Congress, emerging as a powerful young voice demanding progressive change.

Slight in stature, Omar stands out in Congress for her vivacious personality, bold fashion choices, and head scarves.

She has shown herself unafraid of challenging officials with decades more experience than she has, as she did at a hearing where she forcefully confronted Elliott Abrams, Trump's special representative for Venezuela who was convicted of lying to Congress in 1991.

Omar forms part of a rebellious quartet of Democrats known as "The Squad" -- all women of color -- who have tussled repeatedly with Speaker Nancy Pelosi, the top Democrat in Congress, before being targeted in recent days by Trump.

Outspoken and social media savvy, the four have together exposed divisions between the party's old guard, helmed by Pelosi, and a progressive faction chomping at the bit for greater influence.

But since Trump accused the minority lawmakers of hating America, telling them to "go back" to their countries of origin, the spotlight has landed squarely on Omar.

The president singled her out Wednesday at his rally in North Carolina, saying she has "slandered" US servicemembers and "minimized" 9/11.

Omar pushed back on Twitter. "I am where I belong, at the people's house," she wrote. "You're just gonna have to deal!"