Noting that art is about inclusion and the humanities include a vibrant free press, the members alleged that Trump had attacked both. 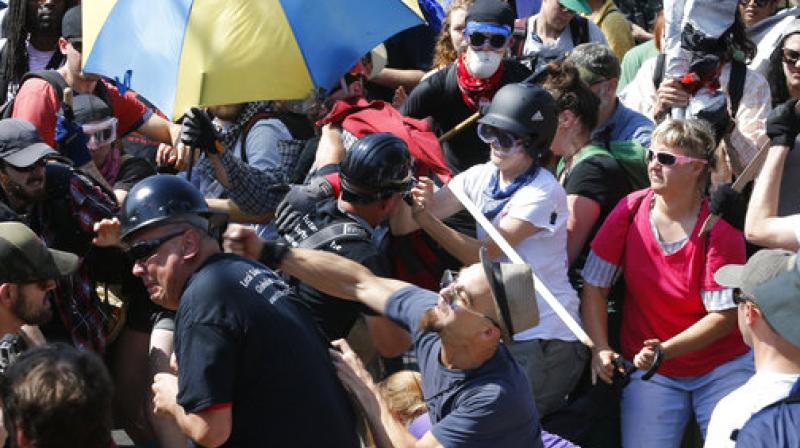 People fly into the air as a vehicle drives into a group of protesters demonstrating against a white nationalist rally in Charlottesville. (Photo: AP)

Washington: The members of the President's Committee on the Arts and the Humanities (PCAH), an advisory committee to the White House on cultural issues, have resigned citing the controversial comments made by US President Donald Trump about the racist violence in Virginia.

In a letter dated yesterday, and signed by 16 of 17 committee members including two Indian-Americans Jhumpa Lahiri and Kal Penn, Trump's decision to withdraw from the Paris Agreement on climate change has also been cited as a reason for their resignation.

Trump had commented about last weekend's "Unite the Right" gathering in Charlottesville, Virginia. He has blamed "many sides" for the demonstrations that left an anti-racism activist dead.

All the members who resigned were appointed by Trump's predecessor Barack Obama.

The White House in a statement said Trump had already decided not to renew the executive order for the PCAH, which expires later this year.

"While the committee has done good work in the past, in its current form it simply is not a responsible way to spend American tax dollars. The PCAH merely redirects funding from the federal cultural agencies that answer directly to the President, Congress and taxpayers. These cultural agencies do tremendous work and they will continue to engage in these important projects," it said.

In its letter, members of the presidential committee said reproach and censure in the strongest possible terms are necessary following Trump's "support of the hate groups and terrorists who killed and injured fellow Americans in Charlottesville."

"The false equivalencies you push cannot stand," said the letter released to the press.

"Elevating any group that threatens and discriminates on the basis of race, gender, ethnicity, disability, orientation, background, or identity is un-American. We have fought slavery, segregation, and internment. We must learn from our rich and often painful history," the members said in the letter.

Noting that art is about inclusion and the humanities include a vibrant free press, the members alleged that Trump had attacked both.

"You released a budget which eliminates arts and culture agencies. You have threatened nuclear war while gutting diplomacy funding. The administration pulled out of the Paris agreement, filed an amicus brief undermining the Civil Rights Act, and attacked our brave trans service members. You have subverted equal protections, and are committed to banning Muslims and refugee women & children from our great country," they said.

Underscoring the importance of open and free dialogue, the members said the actions and words of the president are pushing further away from the freedoms they are entitled to.

"This does not unify the nation we all love. We know the importance of open and free dialogue through our work in the cultural diplomacy realm, most recently with the first-ever US Government arts and culture delegation to Cuba, a country without the same First Amendment protections we enjoy here. Your words and actions push us all further away from the freedoms we are guaranteed.

"Ignoring your hateful rhetoric would have made us complicit in your words and actions. We took a patriotic oath to support and defend the Constitution of the United States against all enemies, foreign and domestic," the members wrote in the letter.