‘Can't be climbed’: Trump shows section of wall at US border with Mexico

Democrats sharply criticise Trump's policies and do not believe a wall is the answer to the country's immigration challenges. 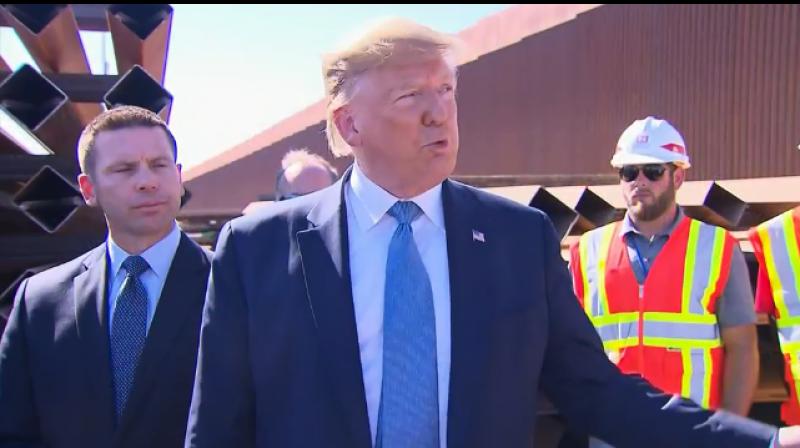 President Donald Trump showed off a section of wall along the US border with Mexico on Wednesday in a bid to illustrate his commitment to crack down on illegal border crossings as he raises money in California for his re-election campaign. (Photo: AP/ screengrab)

San Diego: President Donald Trump showed off a section of wall along the US border with Mexico on Wednesday in a bid to illustrate his commitment to crack down on illegal border crossings as he raises money in California for his re-election campaign.

The Republican president, who is on a three-day swing through the US West that has included a rally in New Mexico and a number of fundraisers in California, also used his trip to criticise the homelessness problem in Los Angeles and San Francisco, two strongly Democratic cities.

While deciding how to respond to an attack on oil infrastructure in Saudi Arabia and fresh from naming a new national security adviser, the president still had immigration at the top of his mind.

Trump traveled to Otay Mesa, a community in San Diego, to view the construction of a 30-foot-high (9-meter-high) steel and concrete barrier that is replacing existing border fencing. Trump said the wall goes deep into the ground, making it difficult to tunnel underneath, and is topped with heat-absorbing material to deter climbers.

Trump told reporters he expected that nearly 500 miles (800 km) of new barrier would be completed by the end of next year.

Trump's supporters are eager for him to keep his promise to build a wall to stem migrant crossings through Mexico from Central America. Crowd chants of "Build the Wall!" are often the loudest at his political rallies across the country.

In February, Trump declared a national emergency in order to divert funding for wall construction when Congress refused to provide the amount he requested. As a candidate in 2016, Trump had promised that Mexico would pay for the wall. It has refused to do so.

Praise and a Warning

On the border wall visit, Trump said Mexico has been "fantastic" on immigration issues, noting that it has deployed tens of thousands of troops to the border to help reduce the flow of migrants. But he warned that if Mexico ended its cooperation he could slap tariffs on the country's imports to the United States. He said a 5 per cent tariff could easily pay for the border wall in six months.

Trump has sought to assure supporters he is making good on his border wall promise, but according to Politifact, his administration has not built new segments of a wall since he took office in January 2017, although it has replaced roughly 60 miles (96 km) of existing barriers.

Democrats sharply criticise Trump's policies and do not believe a wall is the answer to the country's immigration challenges.

Trump is also collecting cash to bolster his campaign coffers as multiple Democratic presidential candidates ramp up efforts to take him on in the November 2020 election.

The president's campaign and the Republican National Committee were expected to raise some USD 15 million at events during Trump's western trip, according to an RNC official. The RNC raised USD 23.5 million in August and USD 141.4 million for the 2019-2020 election cycle so far, and has USD 53.8 million in cash on hand, the official said.

Unlike his predecessor, Democratic President Barack Obama, Trump is not a frequent visitor to California, a heavily Democratic state that Trump lost by more than 4 million votes in 2016. He used his visit to criticise the state for its challenges dealing with a growing homeless population.

"We can't let Los Angeles, San Francisco and numerous other cities destroy themselves by allowing what's happening," he told reporters on Air Force One on Tuesday, suggesting that the issue had dented those cities' reputations.

"If these Democrat liberal politicians don't straighten it out, the federal government will have to come in," Trump told reporters at the border wall on Wednesday.

Big-city mayors in California have said the homelessness problem in the most-populous US state should not be a partisan issue.