Tillerson said China's behaviour and action is 'posing a challenge to the rules-based international order'. 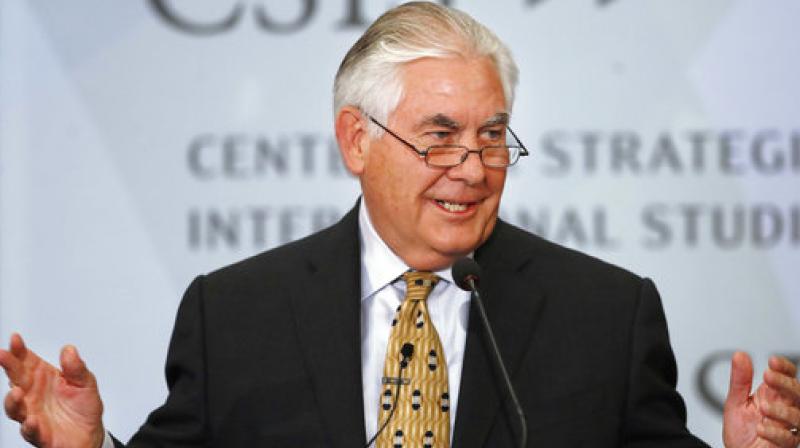 US Secretary of State Rex Tillerson said with India's youth, its optimism, its powerful democratic example and its increasing stature on the world stage, it makes perfect sense that the US at this time should seek to build on the strong foundation of its years of cooperation with India. (Photo: AP)

Washington: The United States is India's "reliable partner" at the world stage in this period of uncertainty and angst, Secretary of State Rex Tillerson said on Wednesday, sending a strong signal to side with India amidst China's "provocative actions" in the region.

In a major India-policy speech, the first by the Trump administration, Tillerson, who is scheduled to visit India next week, referred to the rise of China, saying its behaviour and action is "posing a challenge to the rules-based international order".

"China, while rising alongside India, has done so less responsibly, at times undermining the international, rules-based order - even as countries like India operate within a framework that protects other nations' sovereignty," he told a Washington audience ahead of his maiden visit to India as the top American diplomat.

"China's provocative actions in the South China Sea directly challenge the international law and norms that the US and India both stand for," he said.

Underlining that the US seeks constructive relations with China, he said, "But we won't shrink from China's challenges to the rules-based order, or where China subverts the sovereignty of neighbouring countries, and disadvantages the US and our friends."

"In this period of uncertainty and angst, India needs a reliable partner on the world stage. I want to make clear: with our shared values and vision for global stability, peace and prosperity, the US is that partner," Tillerson said.

He said the emerging Delhi-Washington strategic partnership stands upon a shared commitment upholding the rule of law, freedom of navigation, universal values and free trade.

"Our nations are two bookends of stability - on either side of the globe - standing for greater security and prosperity for our citizens and people around the world," he said, noting that the challenges and the dangers are substantial.

The scourge of terrorism and the disorder sown by cyber attacks threaten peace everywhere. "North Korea's nuclear weapons tests and ballistic missiles pose a clear and imminent threat to the security of the US, its Asian allies, and all other nations, he said.

"And the very international order that has benefited India's rise-and that of many others-is increasingly under strain," he said.

Tillerson said with India's youth, its optimism, its powerful democratic example and its increasing stature on the world stage, it makes perfect sense that the US at this time should seek to build on the strong foundation of its years of cooperation with India.

"It is indeed time to double down on a democratic partner that is still rising - and rising responsibly - for the next 100 years," he said.

"But above all, the world - and the Indo-Pacific in particular - need the US and India to have a strong partnership. India and the US must, as the Indian saying goes, 'do the needful'," he said.

The Secretary of State said India and the US can be the voice the world needs them to be, standing firm in defence of a rules-based order to promote sovereign countries' unhindered access to the planet's shared spaces, be they on land, at sea or in cyberspace.

"India and the US must foster greater prosperity and security with the aim of a free and open Indo-Pacific."

The two countries, he said, need to collaborate to ensure that the Indo-Pacific is increasingly a place of peace, stability, and growing prosperity - so that it does not become a region of disorder, conflict and predatory economics.

"The world's centre of gravity is shifting to the heart of the Indo-Pacific. The US and India - with our shared goals of peace, security, freedom of navigation, and a free and open architecture - must serve as the eastern and western beacons of the Indo-Pacific," he said.