US condemns China for 'escalating' border tension with India 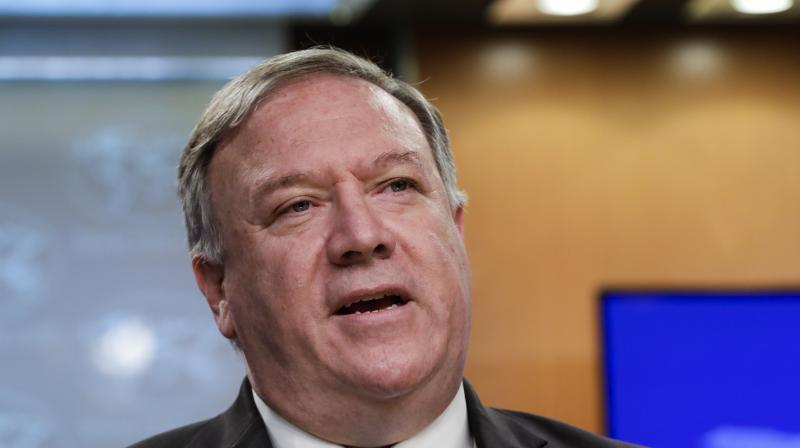 Washington:  US Secretary of State Mike Pompeo has criticised the Chinese Army for "escalating" the border tension with India and militarizing the strategic South China Sea as he described the ruling Communist Party of China as a "rogue actor."

In a scathing attack on the Chinese government, the top American diplomat said that the Communist Party of China (CPC) wants to undo all the progress the free world has made through institutions like the NATO and adopt a new set of rules and norms that accommodate Beijing.

"The PLA (People's Liberation Army) has escalated border tensions with India, the world's most populous democracy. It's militarizing the South China Sea and illegally claiming more territory there, threatening vital sea lanes," Pompeo said, a day after he expressed deep condolences to India on the death of 20 soldiers in violent clashes with the Chinese troops at the Galwan Valley in Ladakh early in the week.

China claims almost all of the resource-rich South China Sea and has also laid claims on the Senkaku islands under the control of Japan in the East China Sea.

Vietnam, the Philippines, Malaysia, Brunei and Taiwan have counter claims over the South China Sea.

The US periodically deploys its naval ships and fighter planes to assert freedom of navigation.

In his virtual address on "Europe and the China Challenge" during the 2020 Copenhagen Democracy Summit on Friday, Pompeo said that for many years, the West, in an era of hope, believed they could change the CPC and improve the lives of the Chinese people along the way.

The CPC took advantage of our goodwill while assuring us they wanted a cooperative relationship. As (former Chinese politician) Deng Xiaoping said 'Hide your strength, bide your time.' I've talked in other venues about why this happened. It's a complicated story. It's no one's fault," Pompeo said.

Over the decades, European and American companies have invested in China with great optimism.

It outsourced supply chains to places like Shenzhen, opened education institutions for PLA-affiliated students and welcomed Chinese state-backed investment in their countries, he said.

But the CPC decreed an end to freedom in Hong Kong, violating a UN-registered treaty and the rights of its citizens. This is one of many international treaties the party has violated, Pompeo said.

"General Secretary (Chinese President) Xi Jinping has greenlighted a brutal campaign of repression against Chinese Muslims, a human rights violation on a scale we haven't seen since World War II. Now, the PLA has escalated border tensions with India, he said.

The clash in the Galwan Valley is the biggest confrontation between the two militaries after their 1967 clashes in Nathu La when India lost around 80 soldiers while the death toll on the Chinese side was over 300.

"The CPC isn't just a rogue actor in its own neighbourhood, it lied about the coronavirus and let it spread to the rest of the world, while pressuring the WHO to assist in its cover-up campaign. Hundreds of thousands of people have died and the global economy has been decimated, Pompeo said.

Even now months into the pandemic, China has not provided access to live virus samples, facilities or information about patients in December in Wuhan, he said.

China is pushing disinformation and malicious cyber campaigns to undermine governments and to drive a wedge between the US and Europe, Pompeo alleged.

"It's saddling developing nations with debt and dependency. It's strong-arming nations to do business with Huawei, an arm of the CPC's surveillance state. It's flagrantly attacking European sovereignty by buying up ports and critical infrastructure from Piraeus to Valencia," said the top American diplomat.

"We must take off the golden blinders of economic ties and see that the China challenge isn't just at the gates; it's in every capital. Every investment from a Chinese state-owned enterprise should be viewed with suspicion," he said.

"Europe faces a China challenge, just as the United States does, and just as our South American, African, Middle Eastern, and Asian friends do. As I said earlier this week to my EU counterparts, I know there's fear in Europe that the United States wants you to choose between us and China.

"It's the Chinese Communist Party that's forcing the choice. The party wants you to throw away the progress we in the free world have made, through NATO and other institutions - formal and informal - and adopt a new set of rules and norms that accommodate Beijing," Pompeo added.