People who are unhappy with US President's policies are the driving force behind campaign to link the word 'Idiot' with Trump's pictures. 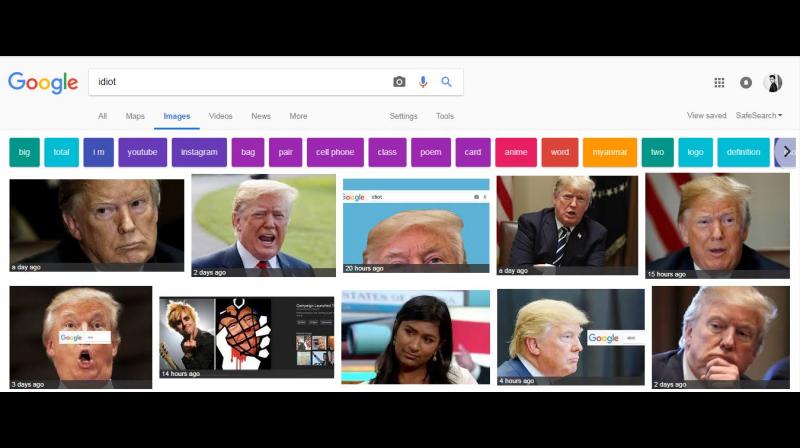 The trend kickstarted as Reddit users upvoted a post which contained a picture of Donald Trump and 'Idiot', The Guardian reported this week. (Photo: File/Screengrab)

San Francisco: First it was "Feku", in May, for Indian Prime Minister Narendra Modi, now "Idiot" is online activists' latest way to mock another world leader, US President Donald Trump, by manipulating Google's algorithm, reports CNET. The search result on Google for images of an Idiot now displays the American President.

The trend kickstarted as Reddit users upvoted a post which contained a picture of Donald Trump and "Idiot", The Guardian reported this week.

People who are unhappy with the US President's policies are the driving force behind the campaign to link the word "Idiot" with Trump's pictures, which has eventually turned into an online protest.

Google's algorithms excel in arranging information displayed in search results which has proved to be a huge help for the progress of the company. However, sometimes they are also party poopers.

Searching for the name "Pappu", in May, provided results linked to Congress President Rahul Gandhi.

Opponents of parties of Rahul Gandhi and Prime Minister Narendra Modi have given the names "Pappu" and "Feku" respectively, thereby taking a jibe at each other.

In another instance which occurred in April, the search result for "India's first Prime Minister" displayed pictures of Narendra Modi. However, Google soon rectified the glitch.