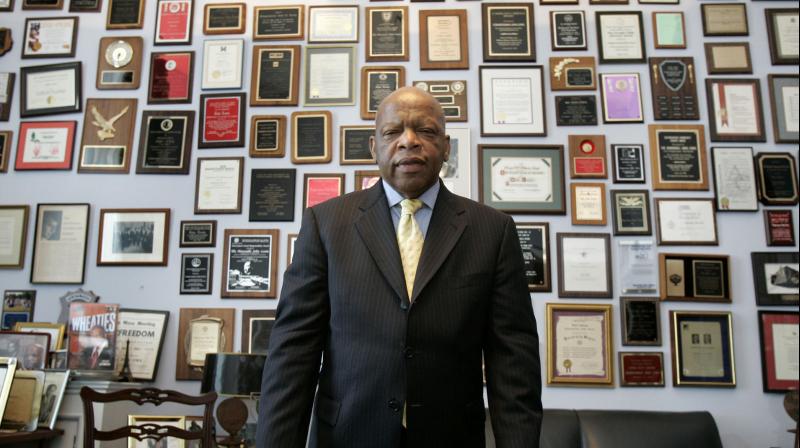 Washington: The Indian-American community has condoled the death of John Lewis, the iconic civil rights leader, who as a member of the US House of Representatives, was instrumental in the introduction and passage of several legislations related to India and Mahatma Gandhi.

Lewis, who died on July 17 at the age of 80, represented Georgia's 5th Congressional District in the US House of Representatives from 1987 until his death.

The Indian-American community condoled the death of Lewis, saying he was a true friend of India and was a firm believer of Gandhi and peace.

India's Ambassador to the US Taranjit Singh Sandhu called Lewis a true friend of India.

"We mourn the loss of Congressman Lewis, an iconic figure of the civil rights movement, a champion of ahimsa and nonviolence and a true friend of India. He will continue to inspire coming generations through his life and the values he stood for," Sandhu tweeted.

Indian-origin Senator Kamala Harris in a statement said Lewis was a giant who showed unending generosity and love for the country.

Congressman John Lewis was an American heroa giant, whose shoulders upon many of us stand. Throughout his life, he showed unending courage, generosity, and love for our country, she said.

The legislation was for the first time introduced by Lewis in 2009 and subsequently every two years.

Prime Minister Narendra Modi also condoled the death of Lewis on Sunday, saying his legacy will continue to endure and inspire people.

We mourn the loss of US Congressman John Lewis, a champion of civil rights, non-violence and Gandhian values. His legacy will continue to endure and inspire.

In 2009, Lewis led a congressional delegation to India to commemorate the 50th anniversary of Martin Luther King Jr's historic journey to India to retrace the steps of Mahatma Gandhi.

"It has been a great honour to be able to walk in the footsteps of Mahatma Gandhi. Visiting his tomb, the site of his assassination, his ashram and his homes is like walking on sacred ground," Lewis then said.

He also introduced a legislation in the House to commemorate the 50th anniversary of the India visit of Martin Luther King Jr.

Lewis was instrumental in the introduction and passage of several legislations related to India and Mahatma Gandhi.

One of them was the legislation in 1998 that gave permission to the Indian Government to establish a memorial to honour Mahatma Gandhi on Federal land in the District of Columbia.

Congressman Lewis was a torchbearer to civil rights of all citizens of the United States, said eminent Indian-American Ramesh Shah from Ekal Vidyalaya.

"He was always respectful to everyone. He never disrespected any politician, Shah said, adding that he was a guiding light and hope for minorities in the US, including Indian Americans. America has lost a hero. I have lost a hero, a dear friend, a good trouble' cohort and colleague," said Congressman Steve Cohen.

"It has been an honour to know and serve with this gentleman. He was the embodiment of Dr King, Mahatma Gandhi, and heaven on earth," he said.