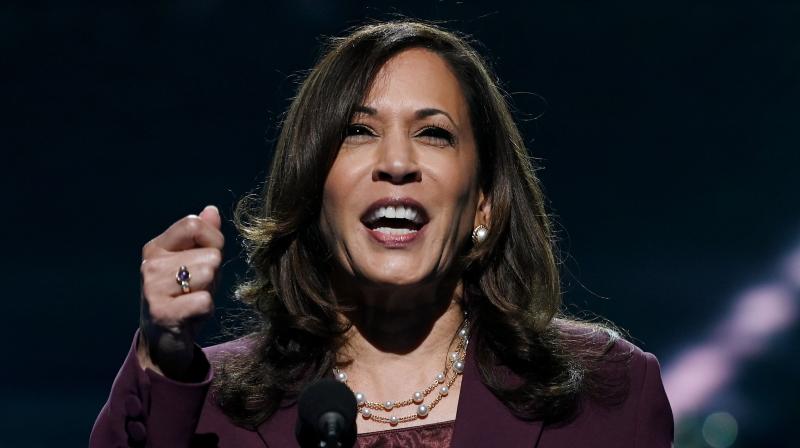 Senator from California and Democratic vice presidential nominee Kamala Harris speaks during the third day of the Democratic National Convention, being held virtually amid the novel coronavirus pandemic, at the Chase Center in Wilmington, Delaware. (AFP)

Harris, 55, was nominated the Democratic Party's candidate for the US vice-president during the party's virtual convention on Wednesday, becoming the first-ever American of Indian and African descent to be picked by a major party for the top post.

Addressing the virtual Asian American & Pacific Islander (AAPI) Caucus meeting, Harris said, "For years, the AAPI community's voice has not been heard. Its concerns ignored and stories forgotten. But this time it's different." AAPI community "is the fastest-growing ethnic group in the United States" representing 11 million voters across the country "and could be the margin of victory in key battleground states this November," Harris said at the meeting hosted by Bel Leong-Hong, co-founder and VP of the AAPI Victory Fund.

She mentioned that Democratic presidential candidate Joe Biden has "pledged to appoint more AAPI judges than all previous administrations combined."

Harris said that since July 15, more than 2,300 Asian Americans have experienced biased instances, "and 'bias incidents' is a soft way of describing what we're talking about."

"Unfortunately, we've seen an increase in instances of awful - some people say disturbing - I say it's absolutely unacceptable. The hateful attacks and intimidation, and frankly, the extensions of hate and hate crimes occurring against members of our AAPI community," the vice-presidential nominee said.

Instead of showing real leadership, President Donald Trump has restored to racist and xenophobic language to deflect from his failures, but also as an extension of who he was when he came into office, she said.

"He from the first days, if not even just from the campaign before his first days in office, spent full time trying to sow hate and division among us. And what has happened certainly during the course of the pandemic and before, is our children are paying the price."

"And that's just one of the so many reasons why I'm eager to get to work with Joe and with each of you on behalf of every American," she alleged.

Describing the presidential election as the most important election of our lifetime, Harris said that the United States is facing three crises at one time: A public health crisis, an economic crisis, and a crisis that has been centuries in the making of systemic racism, and that racism that still exists.

"We are talking about disparities based on race that existed before the pandemic and have been highlighted and exacerbated by the pandemic," Harris said.

"The pandemic's impact has been particularly severe among the AAPI community," she stated.

Since the pandemic, Harris said that 83 per cent of the AAPI labour force with high school degrees or lower have filed unemployment insurance claims in California alone.

She praised the AAPI community for "risking their lives as nurses and doctors and frontline workers and home health care workers - doing the work to save or comfort people they often don't even know." Asian Americans and Pacific Islanders for Biden in a statement said that the community is fired up.

"Our AAPI community is excited and look forward to electing Kamala Harris as Vice President and Joe Biden as the next President of the United States," it said.

"Alongside Joe Biden, Kamala Harris is the leader we need to restore integrity and morality to this nation. Over the years, Harris has championed policies and programs to improve the lives of Asian American and Pacific Islanders across the country. We look forward to a Biden-Harris administration that will continue to elevate our issues and lived experiences," AAPI for Biden said.