Texas Governor Greg Abbott has declared a state of emergency for 13 counties in southeastern Texas. 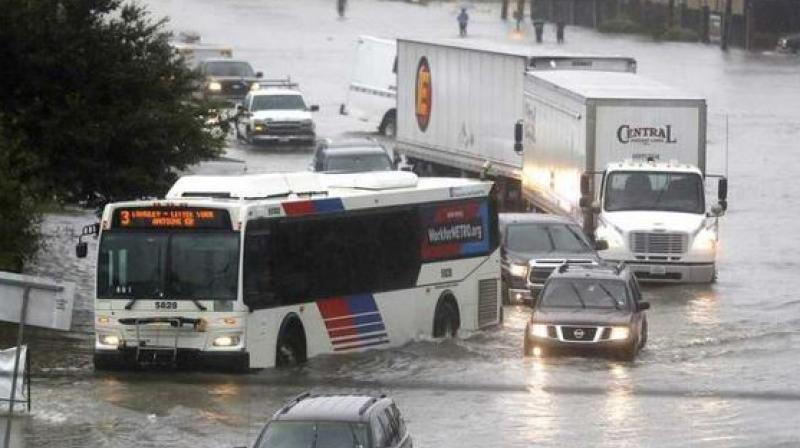 The National Weather Service said the rainfall was winding down in areas that had been hit the hardest, but some parts of Fort Bend, Harris and Galveston counties were seeing additional 2 to 3 inches of rainfall every hour. (Photo: AP)

Houston: The stage is all set for the mega "Howdy Modi" event where Prime Minister Narendra Modi will address over 50,000 Indian-Americans, but the torrential rains triggered by a tropical storm have wreaked havoc in Houston, prompting the governor to declare a state of emergency in several parts of the state of Texas.

Texas Governor Greg Abbott has declared a state of emergency for 13 counties in southeastern Texas.

"This happened very quickly. It just demonstrates that in this day and time, climate change is real. We no longer have to be concerned just with a hurricane. We have to be concerned with almost any sort of weather system that can quickly evolve into a major storm and produce a great deal of rain," Abbott said.

The National Weather Service said the rainfall was winding down in areas that had been hit the hardest, but some parts of Fort Bend, Harris and Galveston counties were seeing additional 2 to 3 inches of rainfall every hour.

However, the volunteers of the "Howdy Modi" event are upbeat and confident that all the attendees at the sprawling NRG stadium in Houston will have an experience they will cherish all their lives.

Leading volunteer Achalesh Amar told PTI that over 1,500 volunteers have been working round the clock to make the event a grand success.

"We are going to have a fantastic programme on Sunday", he said.

The mammoth event reflects the growing size, power and complexity of the Indian-American community, both in the Houston area and the US, he said.

US President Donald Trump, along with a number of high-ranking US government officials - including Governors, Members of Congress and Mayors - will join Prime Minister Modi to attend the "Howdy Modi!" event on Sunday.

"This is going to be a kind of family celebration. We want to say, 'Look at our community here! We are successful. We are strong. We have done good things for Houston!' We would like Modi to know all of this," organisers said.

Swapan Dhairyawan, president of the Indo-American Chamber of Commerce of Greater Houston (IACCGH), said he has witnessed how Houston Mayor Sylvester Turner's visit to India in November 2018 enhanced the bilateral trade.

Dhairyawan said he was confident that Modi's visit to Houston and his meeting with President Trump and top CEOs will "make new inroads in furthering business opportunities in oil and gas, healthcare and Innovation - Houston's three core sectors".

"We need a non-stop flight from Houston to New Delhi. Modi announced a direct flight from San Francisco to New Delhi during his 2015 speech in Silicon Valley, chamber members hope the same happens at Houston," he said.

Jagdip Ahluwalia, founding Secretary and Executive Director of the IACCGH, said President Trump attending the event was a sign of the "growing importance of the US-India relationship".

According to the US Census Bureau Foreign Trade Division, the trade between Houston and India is up 82.2 per cent, with Houston exports to India up 106.5 per cent and India's exports to Houston up by 48.8 per cent.

Jugal Malani, chairperson of the Texas India Forum, which is bringing together all the organisations participating in the event, said Modi's last visit to Washington and meeting with Trump led to a multibillion dollar deal by India to buy US crude oil.

"It was followed by a multibillion dollar deal by India to buy US LNG, a lot of which will ship from our region and we are positive Modi's visit to the home of the energy hub, NASA and Innovation and the Energy Capital of the world will lead to a new series of bilateral opportunities between our region which IACCGH is here to help facilitate and support," Malani said.

Before Prime Minister Modi will deliver the community address, he is scheduled to have a round table meeting with various energy-related top business leaders. There are also some community-related brief meetings involved during his short trip to Houston.

"Our community loves Prime Minister Modi and the multi-million-dollar event is fully funded through resources raised within the community. The mega cultural show will highlight Indian heritage and we have performers from all across America joining in," Malani said.

Meanwhile, some protests by the International Humanitarian Foundation of Houston are also being planned against Modi's visit and some pro-Pakistan and anti-Kashmir billboards have also appeared at some places in the city.

According to sources, over 10,000 people will protest the Indian government's August 5 decision to end Jammu and Kashmir's special status.

However, the Governor's Office, along with a huge pool of volunteers, is working towards the grand success of the event.