Gabbard has become the first-ever Hindu to be running for the presidency in the US, is highly popular among Indian-Americans. 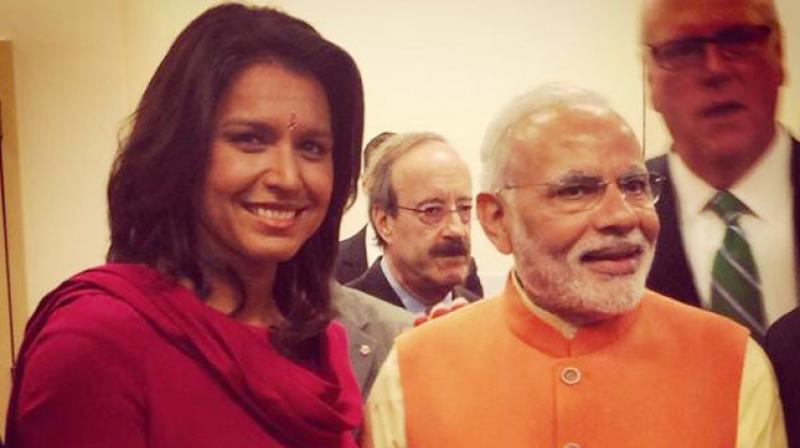 Washington: "Howdy Modi" is bringing together Indian-Americans and Hindu Americans from across the US, Democratic presidential aspirant and the first Hindu woman in the US Congress Tulsi Gabbard has said.

Gabbard, 38, on Thursday welcomed Prime Minister Narendra Modi to the US ahead of his visit beginning on Saturday.

"I'm very happy to see that Howdy Modi is bringing together Indian-Americans and Hindu Americans from across our country, including many of my colleagues in the US Congress," Gabbard said on Thursday.

Prime Minister Modi will attend a large gathering with an audience of over 50,000 at the NRG Stadium in Houston on Sunday, September 22.

US President Donald Trump along with a number of high-ranking US government officials, including Governors, Members of Congress and Mayors will attend the "Howdy Modi!" event.

"India is the world's oldest and largest democracy, and one of the United States most important allies," Gabbard said.

"The Unites States and India must work closely together if we are to address the pressing issues that impact our nations, our countries, and the entire world such as combating climate change, preventing nuclear war and nuclear proliferation, and improving the economic well-being of our people," she said.

Gabbard described the wonderful opportunity the US and India has for "... a strong and lasting partnership between our two great nations, a partnership based on shared values and objectives".

"Let us work together to usher in a 21st century of aloha - respect and love for others, no matter our race, religion, ethnicity, caste, economic status or political affiliations," Gabbard said.

The fourth-term lawmaker is a former Co-Chair of the Congressional Caucus on India and Indian-Americans.

She was part of a select group of Members of Congress to greet and escort PM Modi to the podium when he addressed a Joint Session of Congress in June 2016 and has welcomed him to events promoting greater US-India relations.

A long-time advocate for greater ties between the US and India, she also congratulated Modi when he was first elected as Prime Minister following the 2014 elections.

Gabbard has become the first-ever Hindu to be running for the presidency in the US, is highly popular among Indian-Americans.

She supported Senator Bernie Sanders against former secretary of state Hillary Clinton in the 2016 Democratic primary.