The four year-old cub, whose name means 'precious, treasure' in Mandarin, was destined to head to China under Beijing's 'panda diplomacy'. 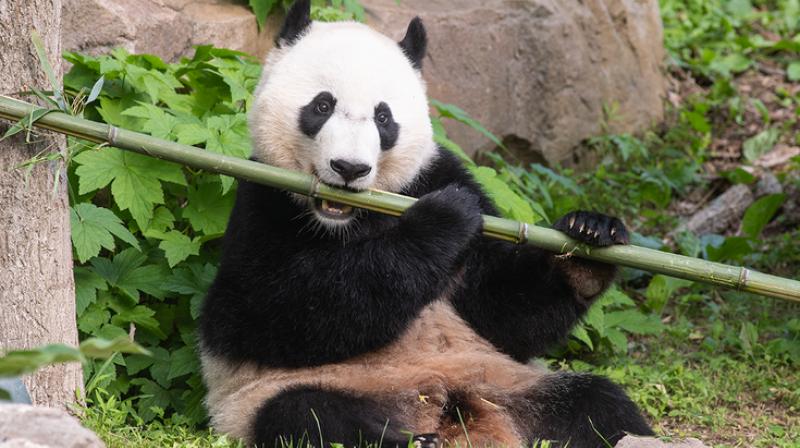 Bei Bei will travel on a specially equipped direct flight from Washington to Chengdu inside a steel and plexiglass crate, accompanied by his keeper. (Skip Brown/Smithsonian's National Zoo)

Washington: The US-born giant panda Bei Bei on Tuesday left the only home he has known at the National Zoo in Washington for a 16-hour flight back to China as part of its research and breeding program.

Bei Bei will travel on a specially equipped direct flight from Washington to Chengdu inside a steel and plexiglass crate, accompanied by his keeper and a veterinarian, zoo officials said. The four year-old cub, whose name means "precious, treasure" in Mandarin, was destined to head to China under Beijing's "panda diplomacy."

China lends pandas to zoos around the world, as the animals are considered "vulnerable" to extinction by the International Union for Conservation of Nature. Once a young panda reaches the age of four, he or she is repatriated to breed with other animals at sanctuaries in China.

"Today is bittersweet," said zoo director Steve Monfort. "We've cared for Bei Bei, and along with millions, watched him grow into a true ambassador for his species," Monfort added.

"We look forward to continuing our 47-year giant panda conservation program and collaboration with Chinese colleagues to study, care for and help save the giant panda and its native habitat." FedEx is paying for the flight and the special outfitting of the Boeing 777 -- called the "Panda Express" for the occasion.

The National Zoo staff has prepared a special stash of treats for him: 66 pounds (30 kilos) of bamboo, two pounds of apples and pears, two pounds of cooked sweet potatoes, two bags of biscuits and water, officials said.

Bei Bei's siblings, brother Tai Shan and sister Bao Bao, have already been returned to China, while his father Tian Tian and mother Mei Xiang will remain at the National Zoo until at least December 2020. Bei Bei was born in August 2015, and his name was announced with great fanfare at an event with then-first lady Michelle Obama and her Chinese counterpart Peng Liyuan.​