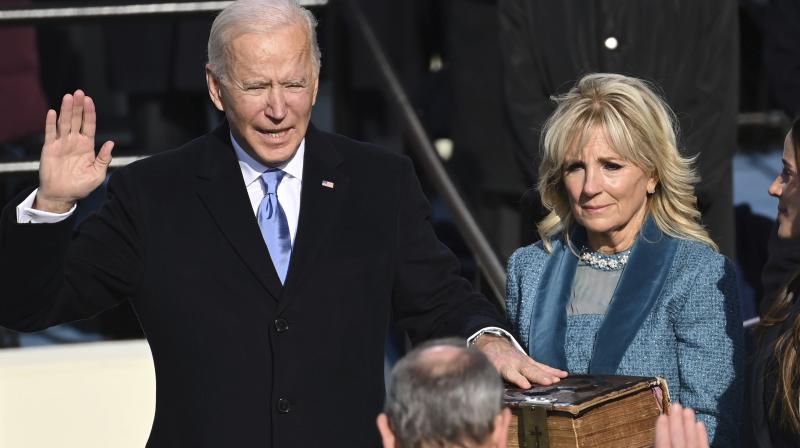 Biden on Wednesday planned to halt construction on Trump's U.S.-Mexico border wall, end the ban on travel from some Muslim-majority countries, rejoin the Paris Climate Accord and the World Health Organization and revoke the approval of the Keystone XL oil pipeline, aides said. (Photo:AP)

Washington: In his first hours as president, Joe Biden will aim to strike at the heart of President Donald Trump's policy legacy, signing a series of executive actions that will reverse his predecessor's orders on immigration, climate change and handling of the coronavirus pandemic.

Biden on Wednesday planned to halt construction on Trump's U.S.-Mexico border wall, end the ban on travel from some Muslim-majority countries, rejoin the Paris Climate Accord and the World Health Organization and revoke the approval of the Keystone XL oil pipeline, aides said.

The new president will sign the orders almost immediately after taking the oath of office at the Capitol, pivoting quickly from his pared-down inauguration ceremony to enacting his agenda.

The 15 executive actions are an attempt to essentially rewind the last four years of federal policies with striking speed.

Only two recent presidents signed executive actions on their first day in office  and each signed just one. But Biden, facing the debilitating coronavirus pandemic, is intent on demonstrating a sense of urgency and competence that he argues has been missing under his predecessor.

We'll press forward with speed and urgency, for we have much to do in this winter peril and significant possibilities  much to repair, much to restore, much to heal, much to build and much to gain, Biden said after being sworn in as the nation's 46th president.

Biden started Inauguration Day by signaling he would seek a return to the Washington traditions and normalcy his predecessor upended.

As Trump, who declined to attend the inauguration, left from Washington in the morning, Biden and his family made their way to the Cathedral of St. Matthew the Apostle, the historic church where John F. Kennedy's funeral Mass was held.

Biden was joined by Democratic and Republican congressional leaders for the service, a nod to the bipartisanship he hopes to inspire in the fight against the pandemic.

Biden's top priority is getting a grip on the pandemic, which reached another grim milestone on Tuesday when the U.S. surpassed 400,000 virus deaths.

In his first act as president, Biden paused his inaugural address and asked Americans to join him in a silent prayer for the victims of the nation's worst public health crisis in more than a century.

Later he planned to sign an order putting in place a mask mandate on federal property and extending the federal eviction freeze. It will create a federal office to coordinate a national response to the virus and restore the White House's National Security Council directorate for global health security and defense.

Biden's first actions reach well beyond the health crisis. He intends to order a review of all Trump regulations and executive actions that are deemed damaging to the environment or public health.

He will order federal agencies to prioritise racial equity and review policies that reenforce systemic racism.

He will revoke a Trump order that sought to exclude noncitizens from the census and will order federal employees to take an ethics pledge that commits them to upholding the independence of the Justice Department.

His orders also seek to fortify the Deferred Action for Childhood Arrivals, known as DACA, a signature effort during the Obama administration that provided hundreds of thousands of young undocumented immigrants protection from deportation and a pathway to citizenship.

These actions will be followed by dozens more in the next 10 days, aides said, as Biden looks to redirect the country without having to go through a Senate that Democrats control by the narrowest margin.

Notably, the opening actions did not include immediate steps to rejoin the Iran nuclear accord, which Trump abandoned and Biden has pledged to reimplement.

Jen Psaki, the incoming White House press secretary, said that while they were not included in Biden's Day One orders, the new president will in the coming days revoke the Pentagon's ban on military service by transgender Americans as well as the so-called Mexico City policy, which bans U.S. funding for international organisations that perform or refer women for abortion services.

In another effort to signal a return to pre-Trump times, Psaki said she would hold a news briefing late Wednesday in a symbol of the administration's commitment to transparency. Trump's White House had all but abandoned the practice of briefing reporters daily.

Biden will sign the actions during his first visit to the Oval Office in four years. Since then, presidential order actions were often marked by clumsy announcements and confusion.

In their first days in office, Trump's team was forced to rewrite executive orders by court order and aides took days to figure out how to use the White House intercom to alert press about events.

The repeatedly cancelled plans to hype new building programs  dubbed Infrastructure week  became a national punchline. Biden aides, by contrast, are aiming to demonstrate they are prepared for the job right out of the gate.

Biden, in his inaugural address, pressed on the theme of unity and urged Americans to set aside politics at a difficult inflection point for the nation.

This is our historic moment of crisis and challenge, and unity is the path forward," Biden said.