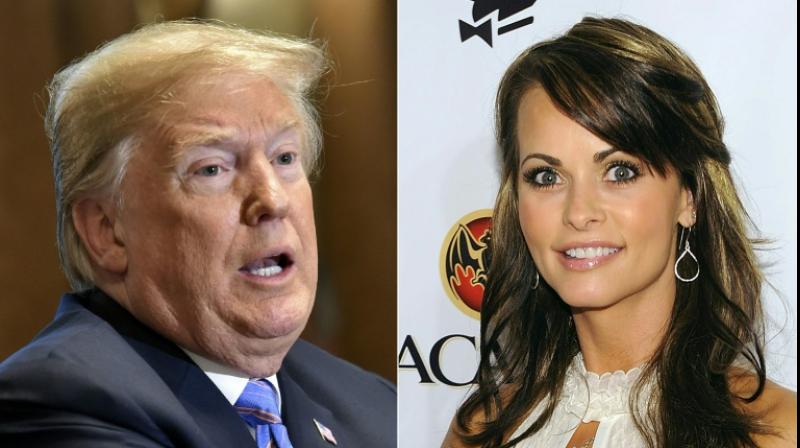 Former Playboy model Karen McDougal claims she had a months-long affair with Trump after they met in 2006, shortly after Trump's wife Melania gave birth to their son Barron. (Photo: AFP)

Washington: President Donald Trump was secretly taped two months before the 2016 election discussing a payment to hush up an alleged affair with a Playboy model and the FBI has the recording, bombshell reports claimed Friday.

The tape was reputedly made by his former longtime lawyer Michael Cohen, who is under federal investigation in New York for his business dealings and reportedly whether hush payments violated campaign finance laws.

The Republican commander-in-chief on Friday did not answer questions shouted out by reporters about the Cohen tape as he prepared to fly out of the White House en route to his New Jersey golf club.

The New York Times broke the story, saying the FBI seized the recording during a raid on Cohen's office earlier this year, quoting lawyers and others familiar with the recording. Cohen has not yet been arrested or charged.

Former Playboy model Karen McDougal claims she had a months-long affair with Trump after they met in 2006, shortly after Trump's wife Melania gave birth to their son Barron. She told CNN previously that he tried to pay her for sex.

The Wall Street Journal said the September 2016 conversation between Trump and Cohen was about buying the rights to McDougal's story, which she sold a month earlier to The National Enquirer for USD 150,000.

The tabloid ultimately sat on it, preventing it from becoming public. The chairman of its parent company, American Media, is a Trump friend.

Friday's reports raise questions about why Trump's campaign denied knowledge of the deal between McDougal and American Media when it became public, as well as fan speculation about how much damage Cohen can inflict on the president.

Trump's current personal attorney, Rudy Giuliani, confirmed to the Times that the Cohen tape existed, but claimed the president had done nothing wrong.

The recording was less than two minutes and gave no indication that Trump had prior knowledge about the media payment to McDougal, Giuliani told the Times.

"It helps us, rather than hurts us," he was quoted as saying by the Journal.

The FBI raided Cohen's home and office in April on a referral from special counsel Robert Mueller, who is looking into Russian interference in the 2016 election and whether the Trump campaign colluded with Moscow.

The Justice Department says Cohen has been under investigation for months for criminal conduct largely centred on his personal business dealings.

Both Daniels and McDougal allege they had affairs with Trump around the same time, in 2006.

Cohen, who became Trump's personal lawyer in 2007, is infamous for paying USD 130,000 to Daniels -- real name, Stephanie Clifford -- shortly before the 2016 election to keep quiet about her alleged affair with Trump.

Her lawyer, Michael Avenatti, claimed Friday there were "multiple" tapes and urged Cohen to release all audio recordings publicly.

"All of them should be released for the benefit of the American public," he told CNN.

"This is the tip of the iceberg," he added. "When all of this evidence ultimately comes to light and I hope that it will... this is going to spell a significant problem for Michael Cohen and a larger problem for the president."

Cohen initially said he used his own money to pay Daniels and was not reimbursed by Trump. The US president has subsequently conceded that Cohen was paid back, despite initially denying knowledge of the payment.

Through White House officials, Trump has denied a relationship with Daniels.

In one recent interview, Cohen apparently signaled a potential willingness to cooperate with prosecutors against the Republican president.

"To be crystal clear, my wife, my daughter and my son, and this country have my first loyalty," Cohen told ABC News in an interview released on July 2.

After The National Enquirer sat on her story, McDougal accused American Media of misleading her into signing the contract and Cohen of intervening inappropriately. In April, the group agreed to release her from the deal.