In Mexican cartel country, priests have uneasy ties with narcos

In all, 21 priests have been murdered in Mexico since President Enrique Pena Nieto took office in 2012, according to Church statistics. 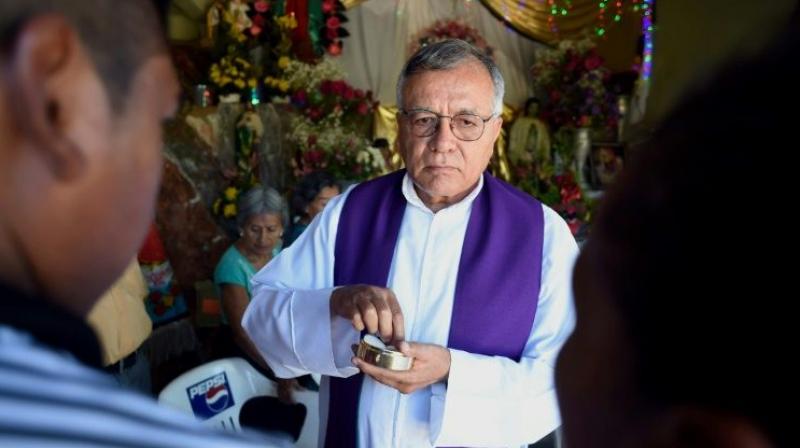 In all, 21 priests have been murdered in Mexico since President Enrique Pena Nieto took office in 2012, according to Church statistics. (Photo: AFP)

Acapulco: When 15 armed men descended on his church in 2017 demanding a blessing, Father Jesus Mendoza asked them to leave their guns outside.

"I can't bless you if you're armed," said the Catholic priest, who works in the violent southern state of Guerrero.

The drug cartel enforcers agreed to put down their rifles, and Mendoza in turn agreed to pray for them.

"God, please touch the hearts of those who forget that we are brothers, and cause suffering and death," he said.

The story is one of many that show the uneasy relationship between priests and drug traffickers in heavily Catholic Mexico, where some Church officials say they have no choice but to engage with the powerful cartels that have de facto control over the regions where they work.

The issue erupted into the headlines again in February when two priests were murdered in Guerrero in a carjacking that had the hallmarks of a drug hit.

In all, 21 priests have been murdered in Mexico since President Enrique Pena Nieto took office in 2012, according to Church statistics.

After the latest murders, Salvador Rangel, the bishop of Chilpancingo, Guerrero was vocal in insisting that Church leaders must engage in dialogue with drug traffickers to prevent a repeat of such incidents in the state.

"I'm trying to make sure there are no more murders," he said.

That clashes with the stance of the Mexican government, which sent the military into the streets to fight drug cartels in 2006 and has been fighting a bloody war with them ever since.

"The bishop is bravely doing his job, and we support him," the group's secretary, Father Alfonso Miranda, said.

In Guerrero, Father Mendoza has spent more than 20 years dealing with the problem on the ground.

He sees Bishop Rangel's reaction as an "emergency tactic."

"It's something we have to do, to reduce the level of violence in some areas," said Mendoza, 65, who served for years at a church in the violent port city of Acapulco before being transferred to a rural congregation outside the city for his own protection.

In the two decades Mendoza worked in the city, he saw Acapulco go from a quiet resort town to a scene of bloody cartel turf wars with several murders a day.

"I started reaching out to families whose loved ones were murdered or missing. It was something that caught us all by surprise," said the gray-haired priest, wearing a simple blue shirt that made him blend in with his congregation in the rural community where he works now, known simply as "Kilometer 30."

He spent eight years working on a support program for victims and their families, and also reaching out to drug traffickers until the violence became too much for him.

"For years, I was bearing the weight of all this every day. And I probably didn't take care of my own emotional health as well as I should have," he said.

One day, he simply collapsed.

After that, his health plunged into a downward spiral. He lost sight in one eye and had to take a five-month leave of absence.

"It all starts to erode your health after a while," he said.

God Brought Them To Me

But despite it all, he went back to his work.

Now, in Kilometer 30 a village in the middle of cartel country, where there is virtually no sign of the police, local government or any other presence of the Mexican state  his door remains open to all, he said.

"When I cross paths with (cartel) gunmen, I greet them. As a pastor, I try to send the message, 'I'm here for you. If you need me for anything, I'm here to serve you,'" he said.

He recalled how in Acapulco, the drug cartel that controlled the area where he worked posted a "hawk," or lookout, outside his church every day for seven years.

"I always made an effort to get to know these young men. There were 15 of them over the years. They would change them. Which meant that the previous one had been killed," Mendoza said.

"Each time, I tried to treat them as brothers. I would tell them, 'I'm here for you if you need anything.'" He even invited some of them to join his parish.

When the group of 15 armed men showed up at the church he now leads, he said, he saw it as an opportunity.

"God brought them to me. They had a spiritual need, and I had to help them," he said.

"I tried to use that opportunity to help them understand."